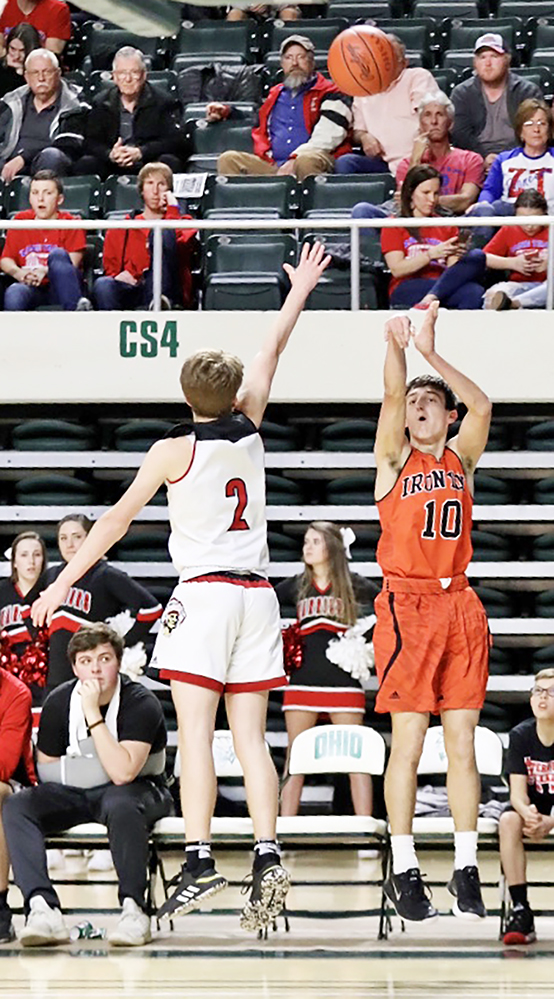 Ironton’s Trent Hacker (10) buries a 3-pointer at the buzzer to end the first quarter and give the Fighting Tigers a 15-3 lead over Eastern Brown during last Saturday’s Division 3 district semifnal game. Ironton upset Eastern 56-41 and plays top-seeded Zane Trace at 8:15 p.m Friday in the district finals at the Ohio University Convocation Center. (Photo By Tim Gearhart)

ATHENS — One team wants a sweep. One team wants revenge. And both of them want the same thing.
A district championship.
One team will get both goals with a win Friday as the Fairland Dragons play the Chesapeake Panthers at 6:15 p.m. for the Division 3 district championship.
The second game on Friday will have the Ironton Fighting Tigers facing the Zane Trace Pioneers at 8:15 p.m. in the other district title game.
Fairland (22-2) won both regular season meetings 59-43 and 57-34 en route to winning the Ohio Valley Conference championship for the fifth straight season. A season sweep gives them the district title.
Fairland’s only league loss was to Gallipolis.
Chesapeake (20-3) wants a win against their arch-rivals but more so for the district title. Revenge will just be an added bonus.
Fairland beat South Point and Chesapeake downed Wheelersburg 54-51 in the district semifinals.
“You get a quick turnaround. You come off a long break from your sectional until now, it’s a quicker break so I think that’ll be better. It’ll keep your kids locked in and your game plan starts just as soon as this one is over,” said Fairland coach Nathan Speed.
Fairland has a balanced offense led by Clayton Thomas with 15.5 points a game, Aiden Porter at 15.4 points a game and Jacob Polcyn 11 per game.
Polcyn leads the team with 8.0 rebounds per contest, Porter had 4.0 rebounds and 2.4 assists while Thomas had 5.0 assists.
Fairland will start the 6-4 Polcyn, 6-foot Porter and 5-10 Thomas along with 6-foot junior Gavin Hunt and 6-2 junior Jordan Williams.
Speed said to forget the previous games. Chesapeake will be a tough to beat.
“(Chesapeake is) very fundamental. What they do, they do well. You’ve got to get back. Transition defense is huge against them and offensively you’ve got to be extremely patient,” said Speed.
The top players off the bench are 5-11 sophomore Zander Schmidt and 6-4 junior Nate Thacker.
Chesapeake is led by 5-10 sophomore Levi Blankenship with 15.6 points a game while 5-10 junior Trent Dearth averages 9.6 points, 3.0 rebounds, 2.4 assist and 4.2 steals.
The rest of the starting lineup will be determined by whomever is healthy and matchups. The main candidates are 5-9 junior Travis Grim, 6-4 senior Josh Cox, 6-4 sophomore Ethan Taylor, 5-8 sophomore Dilen Caldwell and 6-foot junior Nathan Cox.
The Panthers will be without 6-foot senior guard Austin Jackson who is out with a knee injury.
“We’ll take the challenge. We are what we are. We’ve got the guys we’ve got. I’m proud as heck of them. I wouldn’t trade them for anything or ask any more,” said Panthers’ coach Ryan Davis.
“But we’ve got to play. We’ve not performed well at times in big environments this year. In the sectional championship, we performed pretty well in the last part of the third quarter and in the fourth quarter and today we stepped up and performed pretty well. Hopefully, we’ve got over that youth jitters and we can step up and make some plays.”
Ironton (13-10) upset Eastern Brown 56-41 in the district semifinals and now play the top-seed Pioneers (21-3).
The two teams met in the final week of the regular season at Zane Trace with the game going down to the final seconds before the Pioneers won 54-50.
“They’re very big and very skilled. The Nesser kid is about 6-7 and can play inside and go all the way out and shoot the 3. They’ve got in my opinion the best player in Southern Ohio in Evans. They have some good, solid role players around them,” said Ironton coach P.J. Fitch.
Zane Trace is led by 6-foot senior guard Cam Evans who averages 21.4 points a game. Evans was the Division 2 district player of the year last season.
The other starters should be 6-1 senior Colby Swain, 6-7 senior Nick Nesser, 6-foot senior Bryce Johnson and 6-5 senior Triton Davidson.
The top players off the bench are 6-2 senior Luke Johnson and 6-foot senior Camden Larson.
Nesser averages 13.5 points a game and Swain has an 8.3 average.
“We were up one or two with four minutes to go in the fourth up there and didn’t execute and they got the ball in Evans’ hands a couple of times late and ran some spread stuff and got ahead of us by one. Then we missed a shot and had to foul and they beat us by three or four,” said Fitch.
“They’re as good as it gets. They won the D2 district last year and have the exact same group. We can play with them but we just have to play outstanding defense like we did against Eastern.”
Ironton is led by 6-4 junior center Reid Carrico with 13.6 and 8.0 rebounds a game while 5-10 senior guard Jordan Grizzle averages 10.4 points and 2.5 assists.
The Fighting Tigers offense is balanced as well with 6-1 senior Gage Salyers averaging 9.2 points and 6-2 senior Trent Milleson 8.7 points and 4.5 rebounds.
The top player off the bench is 6-3 junior Trent Hacker who scored 12 points in the district semifinal win. Also, getting some key minutes are 6-2 senior Brayden Easterling and 5-10 freshman Landon Wilson.