Stitt has big future ahead at ONU 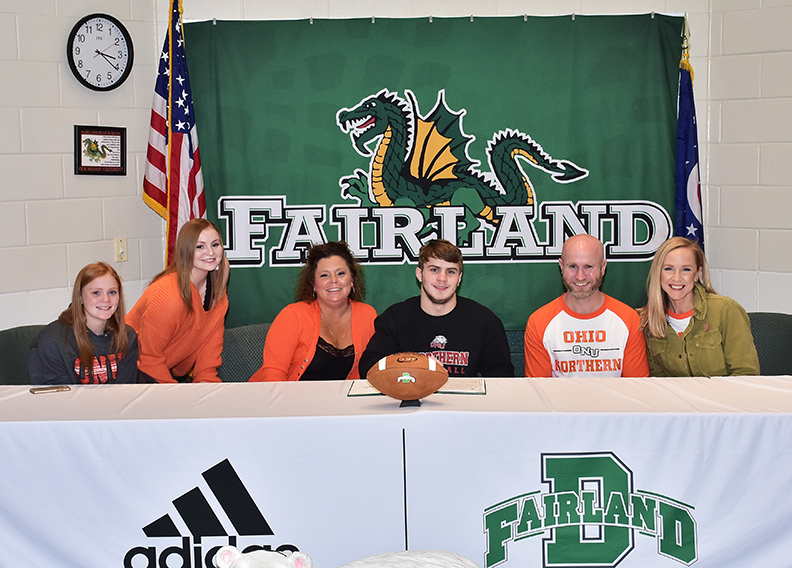 PROCTORVILLE — Michael Stitt was the small man with big production who is taking is game to an even bigger stage.
Despite his 5-foot-8, 155-pound frame, the Fairland Dragons’ senior running back has proven size doesn’t matter as he put up big numbers that caught the attention of several schools.
And one of those schools was the Ohio Northern Polar Bears who signed Stitt to a letter-of-intent.
A two-year starter for the Dragons, Stitt was a duel threat as a runner and receiver. Despite missing a game and a half this past season, he rushed 123 times for 1,004 yards for an 8.16 yards per carry and he caught 17 passes for 259 yards.
Stitt also ran for more than 1,000 yards last season as he led the Dragons to the Division 4 playoffs.
Stitt has played football since the first grade and said he’s always been the little guy on the team. But through it all, he has never doubted his abilities to play the game and even used it as a motivation.
“It (motivates me). You always have to prove yourself because people judge you for your size,” said Stitt.
“I like the physicalness of it. I played basketball until the eighth grade but I couldn’t control myself. I was too fast. I’m going to run track this year. But it’s always been football. I fell in love with it.”
Fairland head coach Melvin Cunningham realized early not to pigeon hole Stitt into another position because of his size and hoped others players like him would get a fair chance.
“I just hope that when it comes to Michael or any player his size, to be honest, you look over at him and the first thing we do as coaches is digest. You’re pushing him around and wondering where are you going to put him. Before you know it, it’s too many years down the road and you could have had that same productivity,” said Cunningham.
“I hope that (Ohio Northern) realizes what they have acquired. The kid runs with balance, and for as small as he is he runs with good power. He runs behind his pads well and you’re not going to find a kid who outworks him. I’ve never had to say, ‘Hey Michael, get going.’ He’d work out with us and then go do his own thing. He’s a special kid and a special player.”
Besides Ohio Northern, Stitt looked at other schools including Wilmington and Marietta.
Ohio Northern was 6-4 last season and has just one losing record since Dean Paul became the head coach. But Stitt said the winning tradition did not have much of an effect on his decision.
“It really didn’t come down to (the record) in making my decision as much as I thought it would. I was looking at more of where I could fit in the best, the team and making an impact,” said Stitt. “I like the style of offense they run. I think that I’d excel in it.”
Stitt said that the Ohio Northern coaches had no reservation regarding his size.
“Obviously, they want me to get a little heavier to take on the college grind of it, but other than that no, they don’t have a problem with my size,” said Stitt.
The Polar Bears return senior running back Christiaan Williams who is the program’s all-time leading rusher with 4,193 yards. Stitt ready to be patient and wait for his chance to play.
“I’m hoping that I can go in and learn from (Williams) and then try and take his record,” said Stitt with a grin.
Stitt is currently undecided regarding a major.