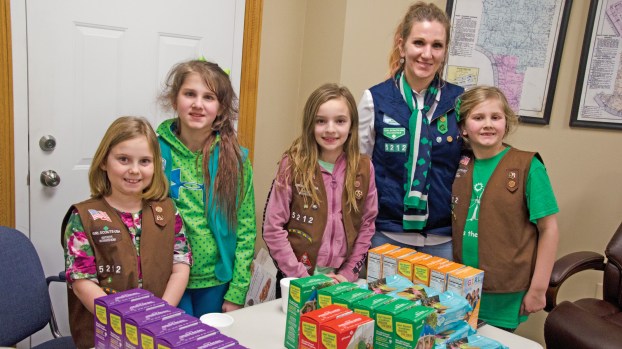 SOUTH POINT — The March meeting of the South Point village council began with some special guests.

Members of Girl Scout Troop 5212 of Chesapeake were set up in the council chambers, selling cookies to those assembled.

The group has 13 members and has been selling cookies since January, troop leader Brandi Jankovic said.

She said, in addition to the council sale, they had also been set up at Casa Grande and Walmart.

The meeting also saw visitors from the U.S. Census office in South Point, which serves 25 counties in southern Ohio.

Ronnie Tyree, the manger of the office, said they employ thousands in the region and are still hiring for the next few months, when workers will go door to door to visit homes that have not responded to the Census.

He said theses jobs will pay $18 an hour from May through July and allow people to set their own schedule.

“There are still hundreds of jobs available,” he said.

Kevin Wood, the village’s engineer, also addressed the room and gave an update on projects and grant for the village.

He said the village has applied for a grant to replace aging water lines from the 1950s, which would be done in conjunction with the installation of sidewalks, for which the village has already received a grant and construction is set to begin next year.

Wood also said the result of an income survey conducted in recent months had been favorable for the village and could help with securing funding for projects.

The council also revisited the issue of a dog ordinance that was passed earlier this year.

“We clarified the difference between dangerous dogs and nuisance dogs,” Mayor Jeff Gaskin said. “We lessened the penalties and, if a dog is out three times, it won’t be declared dangerous.”

He said this was a difference with the Ohio code the ordinance complies with.

The mayor also asked the council whether they wanted to change the policy of police patrols on U.S. 52 within the village limits.

Gaskin said, under the current policy, officers can make one trip on the stretch of highway per shift, but may not “sit and run radar.”

Gaskin said he had no intention of changing the policy and asked the council if they had interest, to which there was none expressed.

The Ironton-Lawrence County Community Action Agency is reaching out to help the patients and workers affected by the slow closure... read more