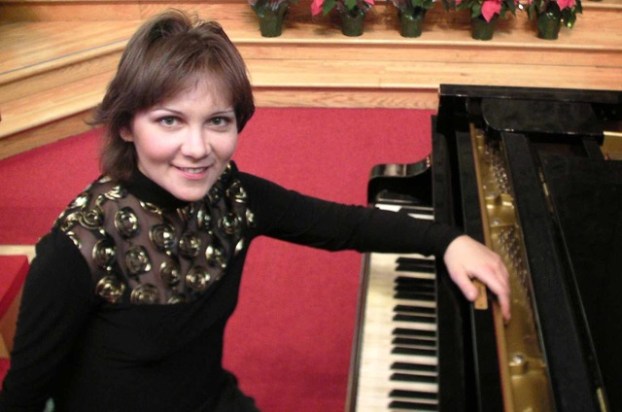 Acclaimed pianist to perform at OUS

Alina Kiryayeva, a Ukrainian-born virtuoso classical pianist who has performed on three continents, will be in concert on Saturday, March 14 at 7:30 p.m. in the Ohio University Southern Riffe Center Mains Rotunda.

Praised for her powerful command of the instrument, unique interpretations and clarity of sound, Kiryayeva captivates audiences with her profound philosophical insight and profound stage presence.

Kiryayeva performed her first solo recital at age eight and her solo debut with an orchestra at age eleven. She was the First Prize winner of the Senagillia International Competition in Italy and has also claimed top prizes in several international piano competitions in the U.S. She was honored by the Ukrainian President, Leonid Kravchuk, with the State Award for Achievements in the Arts.

Kiryayeva is one of very few classical pianists that completed both Bachelors and Masters degrees at the Juilliard School on full scholarship. She has toured the Ukraine, Russia, Mexico, France, Germany, Austria, Holland, Italy, Japan and the U.S and has performed with numerous orchestras in the U.S. and abroad. Kiryayeva is also an avid chamber musician, having collaborated with an array of esteemed artists.

Her upcoming chamber music performances include appearances in the Steinway Series at the Smithsonian Museum and in the Library of Congress in Washington, D.C. In 2013, Alina released a solo album, Sonatas, which was featured on the 150th broadcast of Women in Music on CKWR radio in Ontario, Canada.

This is the last performance on the Ironton Council for the Arts 2019-20 subscription concert series. Admission is $10 and tickets are available at the door. Ohio University students are admitted free with ID.