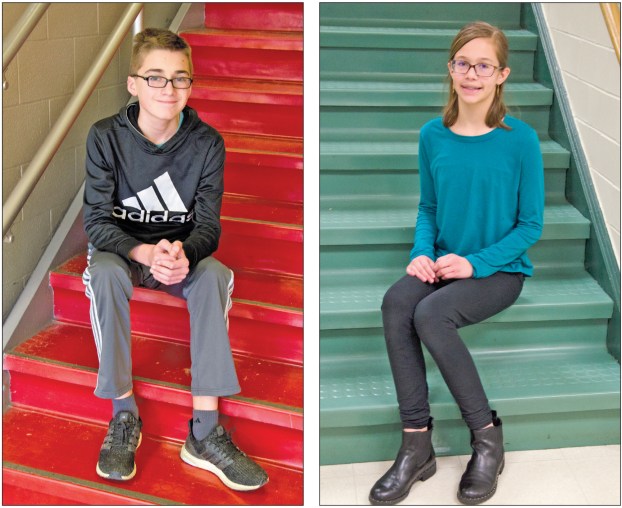 The regional spelling bee is coming up on March 21 and Lawrence County has two students taking part in the event this year.

According to Julie Walters, student services coordinator for the Lawrence County ESC, who administers the county bee, participants for the regional bee take an online test after becoming eligible by winning their school bees.

From there, the top 55 scores determine the participants in the event, which will take place at Ohio University in Athens.

“It’s an honor just for them to take part,” Walters said.

Returning to the event this year is Molly Dunlap, 12, a sixth grader at Fairland Middle School, who competed in last year’s bee.

“I’m really glad I made it,” Dunlap, the daughter of Maryanne and Brian Dunlap, of Proctorville, said. “And I’m really grateful for all the people who helped me study.”

She said, in preparation, she has been working with her teacher, Mr. Wireman, after school on Tuesdays and Thursdays and using a Word Club app to study.

Dunlap said she has two siblings, Mitchell and Meredith, and her family likes to go hiking, with a goal of visiting each U.S. national park.

In addition to the spelling bee, she plays soccer and likes to read.

Visiting the Athens event for the first time is Liam Yancy, 12, a sixth grader at Rock Hill Middle School.

Winning his school bee, coordinated by guidance counselor Bill Haynes, he, like Dunlap, took part in the county bee in December.

The son of Sandra Yancy, of Kitts Hill, he said he has been preparing for the event by studying words on websites.

He is active in cross country and his school’s band, where he plays the saxophone, and said he hopes to go into the medical field as an adult.

He is also a member of Power Ranchers 4-H club, recently formed at Symmes Valley.

Lawrence County fared well in last year’s regional bee, with Hannah McKenzie, of South Point reaching second place, after several years competing in the event. McKenzie, who is now in high school, has moved beyond eligibility for the event, which is open to fifth through eighth grades.

From the regional bee, contestants can then apply for a chance to take part in the Scripps National Bee, which takes place in late spring in Washington, D.C.

The last student from Lawrence County to qualify for that event was Felicity Jenkins, a Symmes Valley student, who made the cut as a sixth grader in 2010.

For the past several years, the Glockner Family of Dealerships has been challenging area high school students to dream up... read more