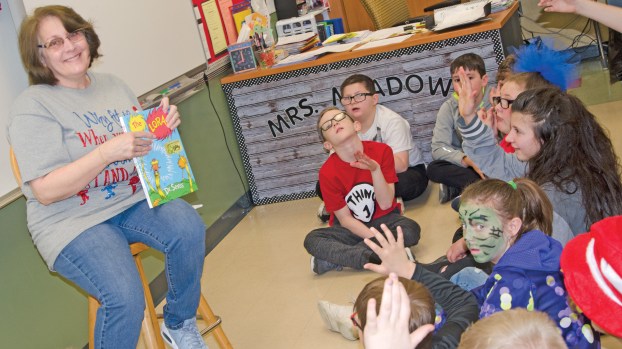 Dawson-Bryant school board member Debbie Drummond reads The Lorax to students at the elementary school for Dr. Seuss Day on Friday.

DEERING — Monday marked the birthday of author Theodor Geisel, better known as children’s favorite Dr. Seuss, and schools throughout the country are celebrating with Read Across America Week.

On Friday, Dawson-Bryant Elementary took part in the event, with children and teachers dressed up as Seuss characters such as the Cat in the Hat and the Whos.

And the morning kicked off with special guests from throughout the community, who read one of Seuss’ works in each of the school’s classrooms.

It was the fourth year for the guest readers, who principal Angie Lafon described as “local celebrities.”

And there were several familiar faces from the school system as well, including superintendent Steve Easterling and school board members Jamie Murphy, Jessica Bryant and Debbie Drummond.

Altogether, Lafon said there were 31 readers this year.

“It’s always good to get out and be with the kids,” Copley said of his experience. “They’re the future of our county and it shows that the leaders here care about them.”

Lawrence County had its first traffic fatality of the year after a man was killed on Thursday evening after his... read more