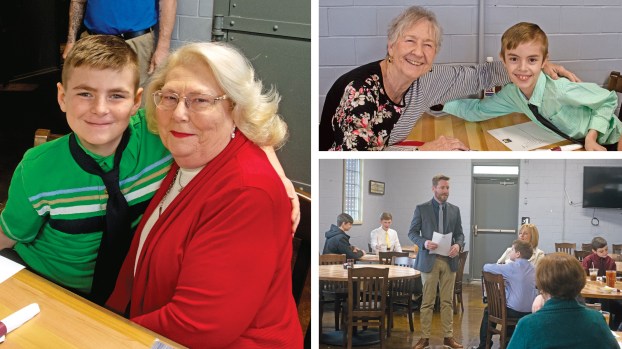 On Friday, the 13 students in Ironton Elementary School’s Gentleman’s Academy got to show off the skills they had learned in the last several weeks during a lunch at the Armory restaurant in Ironton.

IES assistant principal David Ashworth came up with the idea several years ago after talking with teachers and realizing that many of the skills of being a gentleman and being presentable in public had become underused because of the weakening role of men in society and many households have absent fathers or father figures.

Since the boys weren’t being taught the skills, he decided to put together the Gentleman’s Academy to teach them basic things that every gentleman should know, like public manners, how to iron clothes, how to properly shake hands, how to hold a conversation, how to use basic tools and how to tie a tie. The goal is to not only have the boys learn to be gentlemen but learn self-efficiency.

The goal of the lunch was to use their manners when they are in public. The boys wore nice clothes with a tie and were paired up with one of the members of the Ironton Child Welfare Club.

Lance Wetzel joined the academy for a simple reason.

“I want to be a gentleman when I grow up,” he said, adding “I really liked when we learned to sew.”

He said he is already using the social skills he’s been taught.

“I open doors for people,” Wetzel said. “People like it, they are nice about it. It makes me feel really good. I liked everything we learned.”

His lunch companion was Jane Morris. This is her second year attending the lunch and was having a good time.

Mason Daniels said he joined because “I just want to be a gentleman. I liked learning how to tie a tie and how to cook. I can make cheese quesadillas now.”

He said learning social skills has been great.

“People are surprised when I hold a door for them. They say ‘thank you,’” he said.

His lunch companion was Pat Wiseman.

“It was an honor to have a date with Mason today and break bread with him at lunch,” she said. “He is very much the gentleman.”

The Ironton Child Welfare Club makes a donation to the academy and some of its members help out by teaching the students how to sew and other skills.

“I’m proud the club supports the Gentleman’s Academy,” Wiseman said. “I was honored to be a part of it.”

Ashworth said this is the fifth year for the academy. He said the students were more excited than nervous for the event.

“They are going into something that they haven’t done before, but yet they have trained for it,” he said. “The welfare club has been wonderful to work with the boys, to get them out of their shells and break the ice.”

The boys were challenged to start conversations and to be thoughtful towards their lunch companions.

“I think they have done very well,” Ashworth said.