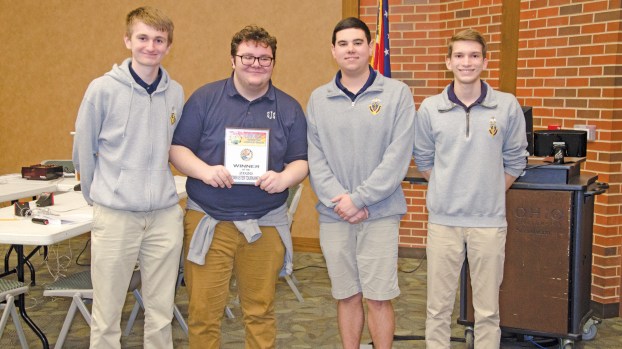 St. Joseph High School was the winner in the Ironmaster Quiz Bowl tournament at Ohio University Southern, and the competition getting to the top prize was intense.

The school went undefeated throughout the day in the double elimination tournament, organized by the Lawrence County Educational Services Center and faced off against Dawson-Bryant High School in the event’s final match.

Dawson-Bryant, who had beaten third place South Point High School to advance to the end, proved a tough competitor.

The match normally would have ended with the 20-question lightning round, but St. Joseph was able to catch up, leaving the match in a 51-51 tie.

At this point, Julie Walters, of the ESC, who coordinated the event, had to bring in nine tie-breaking questions for moderator Taylor Burnette to read in an additional lightning round.

And it was in this round that St. Joseph pulled ahead, winning the event 54-52.

“It’s pretty awesome,” Billie Cogan, St. Joseph’s coach said of the win. It was her first year working with the team.

Dimitri Ward, a senior on the team, was happy to make it to the top after three years competing in the event.

“Last year, we came into the final match,” he said, noting that they had lost to 2019 champions, Ironton High School, in two matches at the end to take second place.

The season champion in those matches was Dawson-Bryant, with a perfect 7-0 record, whose team was comprised of Luke Ferguson, Nathan Davis, Drew Fields, Isaac Dickess, Perry Kingrey, Garrett Dillon and John Turner. They were coached by Karen Whitley.

Outstanding player awards were given to the member of each team who scored the most during the season. They included Ward, for St. Josepeh, Dickess, for Dawson-Bryant, Dawson Forbush, for Chesapeake, Anthony Zhu, for Fairland, Abbey Taylor, for Ironton, Caleb Dillon, for Rock Hill, E.J. Daniels, for South Point, and Thaxton Salyers, for Symmes Valley.

St. Joseph and Dawson-Bryant are now eligible to go on to the OAC Regional Tournament on April 18 in Lancaster.