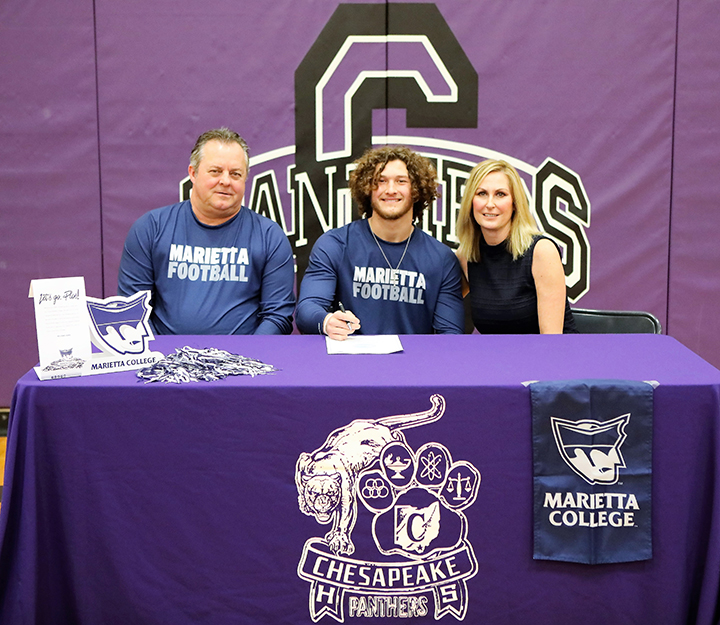 Chesapeake Panthers’ senior running back Will Todd signed a letter-of-intent to play football for the Marietta Pioneers. Attending the signing ceremony were: from left to right, father Jimmy Todd, Will and mother Julie Todd. (Photo By Tim Gearhart)

CHESAPEAKE — Where there’s a Will, there’s a way.
Will Todd may not have the size of a college football player, but never underestimate the size of his heart.
The Marietta Pioneers aren’t.
Marietta College looked beyond Todd’s size and signed the Chesapeake Panthers’ senior running back to a letter-of-intent.
The 5-foot-8, 176-pound Todd has a personal-best 4.5-seconds in the 40-yard dash and bench presses 315 pounds.
“When I started high school football, I was really undersized but I started lifting a lot and added strength and speed. It might have helped me a little bit to be a little slippery,” said Todd.
“I played forever and then I took a few years off in middle school and my freshman year to play soccer. I was friends with all the guys who play football and they got me to play and I just fell in love with it. I’m glad I took the break because when I came back I loved it even more.”
Todd finished the season with 1,046 yards rushing on 134 carries for a 7.8 yards per carry average. He scored seven touchdowns and had two receptions for 31 yards.
Besides Todd, teammate Kamren Harless rushed for more than 1,000 yards and quarterback Donald Richendollar had 836 yards.
Todd said having two backs with those numbers was impressive.
“It was awesome. We just wanted to get after it for each other because there’s not a lot of people who can say they had two people rush for 1,000 yards,” said Todd. “It was awesome for us to be a part of it.”
Chesapeake head coach Todd Knipp said you can’t judge Todd by his size.
“Will is a good high school football player. I’m looking forward to seeing what he can do at the college level. I think he has a good work ethic,” said Knipp.
“He should be able to work himself into being able to help their program. His size kind of throws people off because he plays bigger than what he is. He has great speed, but he is a physical runner and had a knack for breaking tackles.”
Todd not only played running back but also was a defensive back for the Panthers. However, he said Marietta plans to use him on his favorite side of the football.
“I will definitely be on the offensive side, probably some split (end) and mostly running back,” said Todd.
“I’m just super excited. I just want to do as much as I can and try to get a national championship,” said Todd. “They return almost everybody this year so we should be a pretty solid team.”
Todd is anxious to step on the Marietta campus and try to help the Pioneers improve on last season’s 5-5 record.
“I want to go into camp in the best shape I can possibly be in and just do the best that I can and, hopefully, get a travel squad spot. I really want to work into the game as much as possible,” he said.
Todd also talked with Otterbein, Ohio Northern and some other schools early, but he said Marietta’s 3-plus-3 program drew his interest and some former Chesapeake players on the team roster.
Todd plans to major in the polyscience sports management and 3-plus-3 law with plans to do his graduate work at Toledo.

COLUMBUS (AP) — Four assistant football coaches at Ohio State will be paid at least $1 million this year, according... read more