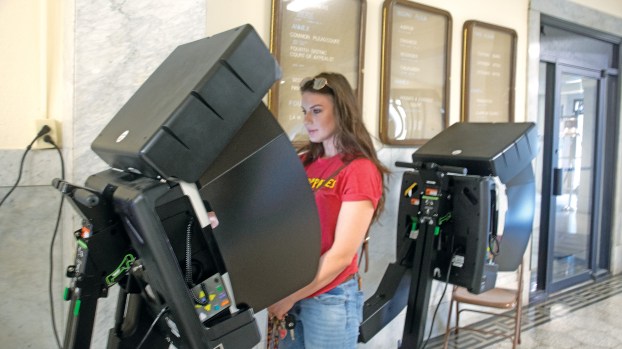 Morgan Webb, of South Point, was in the lobby of the Lawrence County Courthouse to vote early while her son was in school on Thursday. (The Ironton Tribune | Mark Shaffer)

Getting ready: Elections office will be open this weekend for early voting

For those who want to vote early in the Ohio Primary, the Lawrence County Board of Elections is having extended and weekend hours to help voters out.
Toni Bradshaw, deputy director of the Lawrence County Board of Elections, said that the office will be open on Friday for early voting from 8 a.m.-7 p.m., on Saturday, the hours will be 8 a.m.-4 p.m., on Sunday, the hours will be 1-5 p.m. and on Monday, it will be 8 a.m.-2 p.m.
On Tuesday, the polling stations open at 6:30 a.m. and close at 7:30 p.m.
In several counties in Ohio, the polling stations in nursing homes have been closed due to the fear of spreading the coronavirus. That is not an issue in Lawrence County.
“We do not have any polling stations in long-term care facilities or hospitals,” she said.
And as a precaution against the spread of the coronavirus, board of election workers spent part of Wednesday assembling 30 bottles of sanitizer to wipe down the touch screens of the voting machines.
“At all polling locations, we are supplying these pink or green bottles of alcohol and towels to clean the machines,” Bradshaw said. “So, between each voter, they are going to be disinfected to prevent germs from spreading.”
She said, although there are no cases of coronavirus in Lawrence County, “we are trying to prevent anything from spreading, whether its coronavirus or the flu or the common cold,” she said.
As of 2 p.m. Thursday, there had been 582 in-office voters, 2,613 request for absentee ballots and 2,597 had been mailed out.
One early voter was Morgan Webb, of South Point, who stopped by the courthouse to vote while her four-year-old son was in school.
“I’m here to vote for the developmental disabilities levy,” she said. “I wanted to vote while my son was in school and didn’t have to bring him down here. He’s four and he has autism, so he is affected by the levy.”
Bradshaw said on Tuesday, they had a webinar with the state with the recommendation of having a locked drop box outside the courthouse on primary election day for people to drop their ballots off.
“It would be manned by a Republican and a Democrat with the locked drop box,” she said. “So, people can drive by and drop off their ballot.”
She said they haven’t worked out the details about it yet.
“We don’t know where yet, because we just got this information and it was the end of the day,” Bradshaw said. “We will be working on that. But it will either be at the Fourth Street doors or the Fifth Street doors.”

Heather Whitman What is your vision for the community? I would like to see a community that is healthy, happy... read more