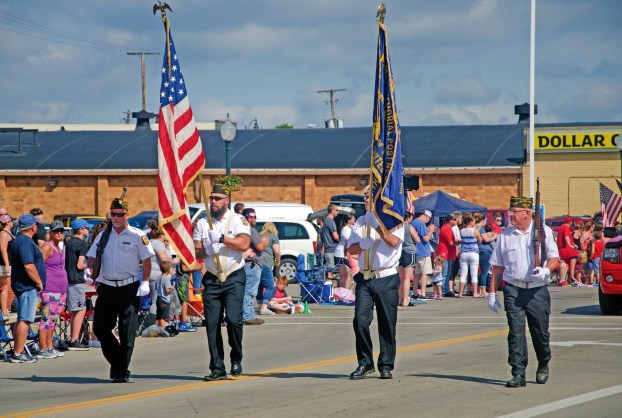 The color guard from VFW Post 8850 leads off the 151st Ironton-Lawrence County Memorial Day Parade in 2019. Parade officials said this year’s event is still scheduled to take place, but they are watching updates on health and crowd advisories regarding the coronavirus, which could impact the event going forward. (The Ironton Tribune | Heath Harrison)

Organizers following virus updates: 152-year-old event is still on schedule for May 25

With the state of emergency regarding the coronavirus, schools are closed, restaurants have been forced to go to pick-up service and events across the nation have been canceled for coming weeks.

And, for Ironton, that means questions on what will happen with what is easily the biggest event in Lawrence County.

The 152nd annual Ironton-Lawrence County Memorial Day Parade is set for May 25th.

The event has taken place every year since grand marshal Capt. McQuiqq led its step off in 1868, shortly after the Civil War. Two world wars and the Great Depression did not deter it, but, with limits on crowd size in place due to the state of emergency regarding the coronavirus, many have been wondering if the event, which draws more than 30,000 people to the city each year, will take place.

Lou Pyles, of the parade committee, who is set to be this year’s division commander, said many have asked her about the status of the event.

She said the parade committee and officials have decided it is too early to cancel it and are waiting to see if the restrictions and advisories will be lifted by then.

“We’re going ahead with planning,” Pyles said, hoping that there will be a return to “normalcy” by late May, which will allow them to hold the parade.

For now, the committee is still taking entries for floats and those who want to march in the event, and all surrounding activities are still scheduled to take place.

Pyles said, in addition to the spectators, the parade participants usually number in the thousands, with entries of school bands, cheerleaders, dance teams, scouts and others regularly having dozens of participants.

The state of Ohio has currently placed a ban on mass gatherings, while the White House has advised groups to number no more than 10, in order to curb the spread of the disease.

Should the limits remain in place, making the typical parade format impossible, Pyles said they will follow all rules in place, but that some type of observance would take place, keeping the yearly tradition, the longest running in the nation, alive, if even on a small scale.

“A few of us would walk the parade route,” she said, saying a color guard might accompany them. “That way, we can honor our vets and keep the parade’s continuity.”

Briggs libraries to be closed until April: Fines suspended through June 1

The Briggs-Lawrence County Public Library will be closing all its branches at 5:30 p.m. today. The closure will be for... read more