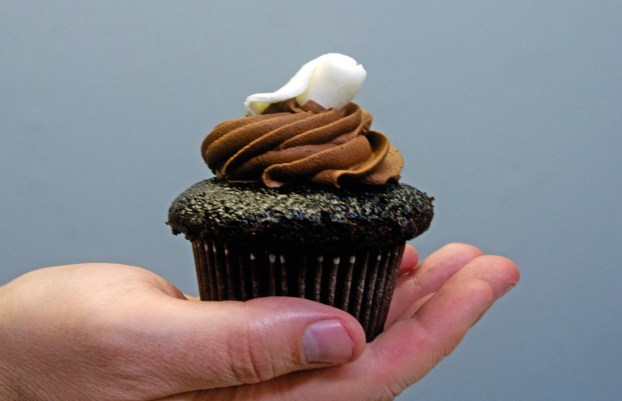 Chocolate cupcakes, topped with toilet paper, are one of two specialty treats offered by Sugar & Spice Sweets To Go in Coal Grove themed around the current state of emergency surrounding the coronavirus. (The Ironton Tribune | Heath Harrison)

COAL GROVE — A local bakery is trying to bring a smile to people during a frustrating time.

Sugar & Spice Sweets To Go in Coal Grove is offering two specialty cupcakes for pickup, themed around the current state of emergency surrounding the coronavirus.

One is a corona lime cupcake, owner Heidi Clark said, which is a yellow cupcake with lime shavings.

The other is a chocolate cupcake, topped with a roll of toilet paper, made from fondant icing.

“I’m just trying to lighten the mood,” Clark said. “And to give a little comic relief to a dire situation.”

The bakery has been in operation on Marion Pike since 2011 and Clark also owns Spice of Life catering, established in 2007, though she said that has been shut down by the emergency orders issued by Gov. Mike DeWine.

Clark said the creations have been well received and people have been buying large qualities to take back to offices.

“We’re just trying to keep up with the demand,” she said.

In just one week, Ohio has seen a massive surge in unemployment claims due to the closure of many businesses... read more