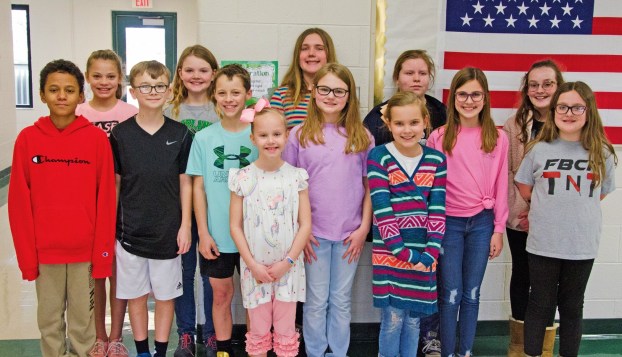 Class winners from cursive writing projects Fairland West Elementary are seen on March 5. The school has been teaching students the skill, which many across the nation had phased out in favor of keyboarding classes. (The Ironton Tribune | Heath Harrison)

Not a lost art: Fairland West focuses on teaching cursive

Editor’s note: This story was compiled before all schools in Lawrence County dismissed for an extended spring break as part of the state of emergency surrounding the coronavirus.

ROME TOWNSHIP — With the advent of the digital age, most schools across the nation began to focus on keyboarding and, as a result cursive handwriting began to fall out of many academic curriculums.

However, in Ohio, the state mandates that the form of handwriting continue to be taught and, at Fairland West Elementary, students have been focusing intensely on it this year.

“It’s something fun to teach the children,” she said, stating it improves their writing skills, presents a challenge and generates positivity about writing assignments.

Assistant principal Sandy Joseph said students are taught the Zaner-Bloser method, which originates with an international publishing company based in Columbus.

“Cursive writing is apparently making a comeback as parents are requesting that their children learn how to write letters and read letters in ‘longhand,’” she said. “This became an issue at the Ohio Legislature, so, last summer, they passed a bill requiring that schools in Ohio teach cursive writing.”

Joseph said each student is given a workbook and they learn how to hold the pencil and tilt the paper, as well as the Zaner-Bloser form of the words.

This year, students had the option of taking part in a contest with the company, and the winning samples of writing from each grade line the school’s hall across from the office.

The top three winners were Rayyan Sohail, of the third grade, Siena Bozick, of the fourth grade and Andrew Cobb, of the fifth grade.

“This is the first year we’ve participated in the contest,” Joseph said, stating entries were based on students all writing the same sentence. They were sent to the company and winner will be announced in May, with 18 selected from each state with a top prize of $500.

Joseph said brought in her grandparents’ marriage license to show the students the importance of learning cursive and how it is used in documents.

“This will show students the importance of learning cursive to be able to read historical documents like the Constitution and Declaration of Independence, and also for family heirlooms like marriage license, birth certificates, wills, etc.,” she said.

Officials: No plans for interstate travel ban Despite rumors, there are no plans to close the state’s borders. Over the... read more