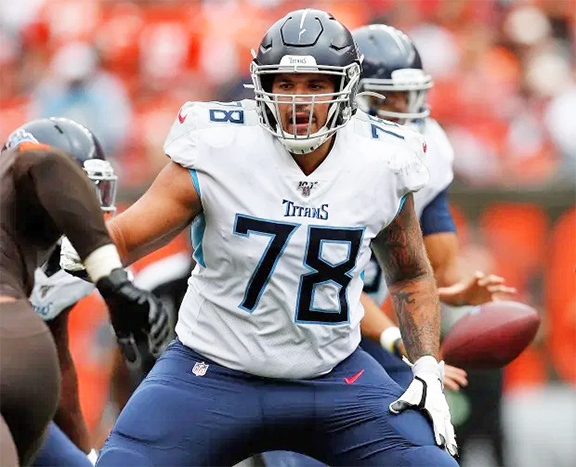 Newly-signed free agent right tackle Jack Conklin is expected to help solidify the offensive line for the Cleveland Browns. The team will now look to address left tackle in the draft. (MCT Direct)

CLEVELAND (AP) — Jack Conklin helped make Derrick Henry a rushing champion in Tennessee.
The Browns wouldn’t mind if he made running back Nick Chubb the next one.
One of the NFL’s top right tackles, Conklin signed with Cleveland on Friday as the Browns finally announced part of a free-agency haul aimed at plugging some major holes while infusing more talent into their roster.
Conklin was welcomed along with tight end Austin Hooper, linebacker B.J. Goodson and fullback Andy Janovich, who came over in a trade with Denver.
Unlike many teams, the Browns are waiting until players pass their physicals before announcing they’ve signed their contracts. Cleveland has been one of the league’s busiest teams this week as first-time general manager Andrew Berry was aggressive in getting new coach Kevin Stefanski some quality players.
Berry wasn’t as active Friday, but he did add another safety in getting Andrew Sendejo to agree to a one-year, $2.25 million deal. Sendejo was in Minnesota with Stefanksi for several years.
Earlier last week, the Browns reached agreements with quarterback Case Keenum, defensive tackle Andrew Billings, cornerback Kevin Johnson, safety Karl Joseph and return specialist Jojo Natson.
Those signings are expected to be announced in the next few days.
Conklin is the gem of Cleveland’s free agent class. After spending four seasons with the Titans, he’s excited about joining another team on the rise.
“I’m pumped to get started and be a part of this great organization,” Conklin said. “Going through the process, Cleveland definitely became what I felt as the main suitor. To have a team like Cleveland be so excited about me, that was the biggest part for me and my family. We wanted to go somewhere where a team was super excited and that was going to be a huge key to help the team and be a big part of the community.”
Adept at run blocking and pass protection, Conklin’s arrival boosts a Cleveland line that struggle on both ends last season but was solid in the middle. He’ll join steady center J.C. Tretter and two-time Pro Bowl left guard Joel Bitonio up front, and the Browns are expected to address a major need at left tackle in the upcoming draft.
“When you’re talking about being a productive offense, certainly you have to play in a cohesive manner from the front to the back,” Stefanski said. “Adding pieces along the offensive front really allows you to do different things schematically, and Jack’s a big piece of that.”
Conklin signed a three-year, $42 million contract with the Browns. His agent, Drew Rosenhaus, wanted a three-year deal because Conklin will only be 28 when he’s eligible to hit the market again in 2022 — unless the Browns sign him to an extension before then.
Hooper got a four-year, $42 million deal and he’ll give the Browns another down-field target for quarterback Baker Mayfield and someone to take the pressure of wide receivers Odell Beckham Jr. and Jarvis Landry.
“I’m really excited,’’ Hooper said. “Coach Stefanski, from what I’ve heard about him, I just really valued his coaching style and schematically it matches what I’ve been asked to do before in the past, so hopefully it’s a smooth transition. And the amount of talent on this team, it just really excites me.”
Hooper caught at least 70 passes in each of the past two seasons with Atlanta. The 25-year-old also knows he may be asked to block for Chubb on occasion.
“The nature of the position is block someone 40 pounds heavier than you or outrun someone 40 pounds lighter than you,” Hooper said. “And in terms of line of scrimmage, I’ve honestly just grown into my body and just understanding leverage at a different level because some of the best athletes on the field are typically those guys on the edge. They present a good challenge week in and week out.”
Goodson will drop into the middle of Cleveland’s defense and replace Joe Schobert, who walked as a free agent and signed with Jacksonville. The veteran will also be asked to mentor second-year linebackers Mack Wilson and Sione Takitaki.
“I want to help lead those guys,” Goodson said. “I feel like I can be a great addition and help for the team.”
The Browns sent a seventh-round draft pick in 2021 to the Broncos in exchange for Janovich, who will allow Stefanski to run some of the traditional, two tight ends, one fullback sets he preferred in Minnesota.
“He’s a schematic fit to what we want to be,” Stefanski said. “He has all the intangibles you think of when you think of fullbacks. He’s as tough as they come. He’s a team player through and through. Fits the mentality of what we’re trying to be.”