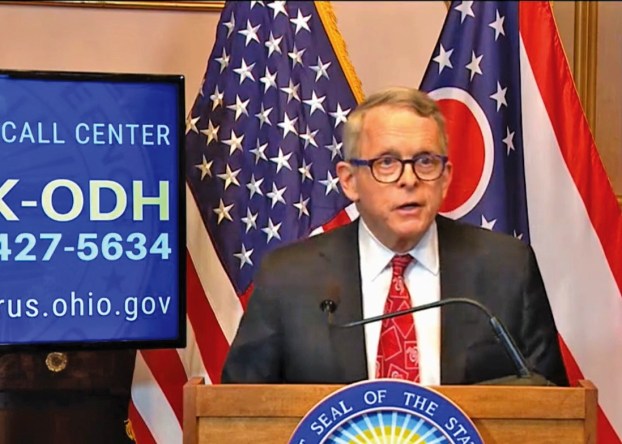 Coronavirus toll reaches eight in Ohio: State has 564 confirmed cases in 49 of 88 counties

COLUMBUS — Ohio Gov. Mike DeWine said on Tuesday that eight people have died of the coronavirus in Ohio.

The state now has 564 confirmed cases in 49 of its 88 counties, with 145 hospitalizations. The governor said the actual number of cases is believed to be much higher.

The highest number of cases are in Cuyahoga County, where 167 are infected, and Franklin County, with 75 cases.

There are no confirmed cases reported in Lawrence County or neighboring Scioto County at this time, but one case has been reported in Gallia County, which resulted in a fatality. That individual was diagnosed at Cabell-Huntington Hospital in Huntington, West Virginia.

The first fatality from the outbreak was reported in Erie County on Friday.

His identity was released over the weekend as Mark Wagoner, Sr., 76, an attorney from the Toledo area.

“It was someone who Lt. Gov. Husted and I knew very well,” DeWine said on announcing the death on Friday. “He was very well respected by everyone who knew him. All of us extend our deepest sympathy.”

On Tuesday, the governor used his daily news conference to urge Ohioans to continue practicing social distancing during the stay-at-home order.

“As we have watched different countries and other states, it is important for us to remind you of our goal to flatten the curve,” he said. “We have to do what we are doing so our health care system is not overwhelmed. Not only for COVID-19 patients but also for other emergencies.”

The governor also directed viewers to the hashtag #InThisTogetherOhio and #StayAtHomeOhio on social media, where he said his team has reached out to well-known Ohioans to post videos encouraging the state’s residents to follow best practices.

DeWine said his office is working to supply and prepare hospitals, partnering with the private sector on securing more beds and masks. He said his office has also asked hospitals to avoid elective surgeries to prepare for the coming need on those facilities and best allocate resources.

DeWine also addressed the economic impact of the shutdown.

“That’s certainly on everyone’s mind,” he said, stating he thinks every day about those who are struggling.

DeWine said he has been asked about the statements by President Donald Trump, who said Tuesday that he wants to see the economy “re-open by Easter” on April 12.

The governor said he shares the frustration the president has and that he wants to end the shutdown as soon as he is able to do so safely.

“The truth is protecting people and protecting the economy are not mutually exclusive,” DeWine said. “In fact, one depends upon the other. The fact is, we save our economy by first saving lives. And we have to do it in that order. If our hospitals are overwhelmed and thousands of our fellow Ohioans do not get the care they need. If many of our nurses and doctors get sick, that’s a personal tragedy for them and a tragedy for all of us. And it’s also not helpful to all of us as we look to rebuild this economy moving forward. That would be truly destructive.”

At Tuesday’s Lawrence County Commissioner meeting, they were updated by the county health department in regards to COVID-19 testing and... read more