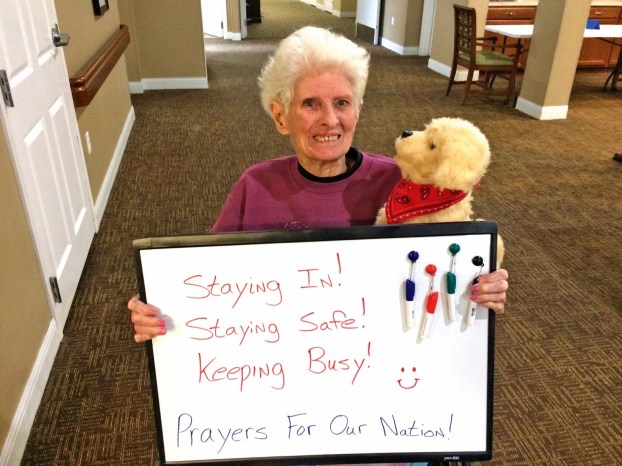 ROME TOWNSHIP — With a state of emergency in effect in Ohio due to the worldwide COVID-19 pandemic, many businesses have closed or are having to adjust to the new regulations in place.

One of those are nursing homes and senior living communities, which has been put in a lockdown over the past few weeks.

The Wyngate at RiversEdge in Proctorville has had a “no visitors” policy in effect during this time, activities director Julie Poff said.

She said the facility has been practicing social distancing, and is adjusting to keep residents entertained and in good spirits.

“I’ve been leading an exercise activity in the dining room, and we keep it to one person per table and they’re six feet apart,” she said.

The Wyngate has two buildings, one with apartments for independent living for seniors and one for assisted living.

Poff said they have been allowing residents to also go out for walks during this time.

She said some popular activities are still taking place.

“We’re still doing a lot of the things we’ve been doing,” she said. “We’re having bingo, but the prizes have been tissues and toilet paper, because that’s what they told us they wanted.”

She said the dining situation has also been adjusted for residents, with one per table.

“We brought in some extra tables for them,” Poff said.

She said they have also been keeping church services going for residents.

One example she gave is a local Catholic priest, Monsignor Dean Borgmeyer, of St. Joseph in Huntington, whose mother is at the facility.

“He’s been doing messages online and we’re setting one up for here this evening,” Poff said.

She said Borgmeyer will do a mass in the morning and evening for residents.

Poff said, with no visitors allowed, the facility is also working to help residents stay in touch with friends and family.

She said the Wyngate’s chancellor purchased several Echo devices, which are laptop screens, which allow residents to call family via Facetime and on phones.

Poff said, overall, things have been going well during the last two weeks.

The person in Gallia County who was the Tri-State’s first reported case of having COVID-19 has died. The case was... read more