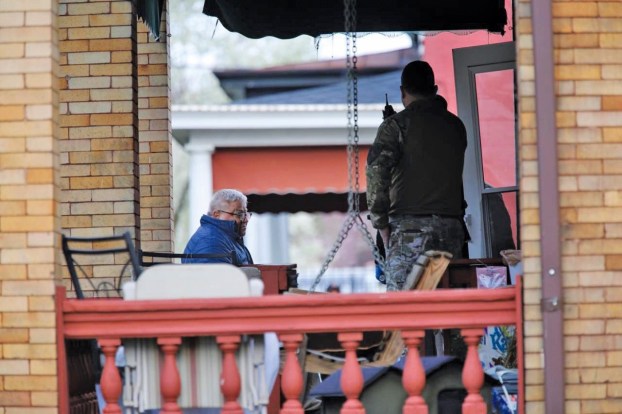 Mike Mearan sits on deck in Portsmouth, surrounded by police on Wednesday. The Ohio Attorney General’s Bureau of Criminal Investigation is asking the public for information about Mearan in their investigation.(TNS/Liz Dufour / The Enquirer)

PORTSMOUTH — Ohio Attorney General’s Bureau of Criminal Investigation (BCI) is asking the public for information about a Portsmouth attorney.

On Wednesday, BCI executed a search warrant on the Sixth Street office of attorney Michael Mearan. The office is located next to the Scioto County Courthouse in downtown Portsmouth. Officers from the Portsmouth Police Department blocked off the area while state investigators searched the house and took out boxes. Media reports say the Attorney General John Yost was present.

BCI is investigating and is not giving a reason why the office was raided.

In late 2018, the Cincinnati Enquirer investigated rumors of Mearan being involved in the trafficking of women for sexual purposes and talked to women who claimed they were prostituted to officials in return for a number of things including money and reduced sentences in criminal cases.

After The Enquirer’s story was published, BCI began investigating the case and reflects what was initially outlined in a sealed federal wiretap affidavit issued as part of a separate Drug Enforcement Administration investigation several years ago. That document, obtained by The Enquirer in early 2018, includes accounts of Mearan sending women to Florida and other states to have sex for money.

That investigation resulted in eight drug convictions, but Mearan was never charged. The DEA said it had handed any notes on Mearan over to the FBI, and it is not clear what happened to any follow-ups from authorities.

In all criminal investigations, innocence is presumed unless guilt is proven in a court of law.

BCI is asking anyone with information about suspicious activity involving Mearan to contact BCI at 1-855-BCI-OHIO (855-224-6446) or file a tip anonymously online at https://www.ohioattorneygeneral.gov/Individuals-and-Families/Victims/Submit-a-Tip/BCI-Investigations

Some information for this story came from the Tribune Content Agency.

• A single lane restriction is in effect on U.S. 52 westbound between the Ashland, Kentucky Twin Bridges and Lick... read more