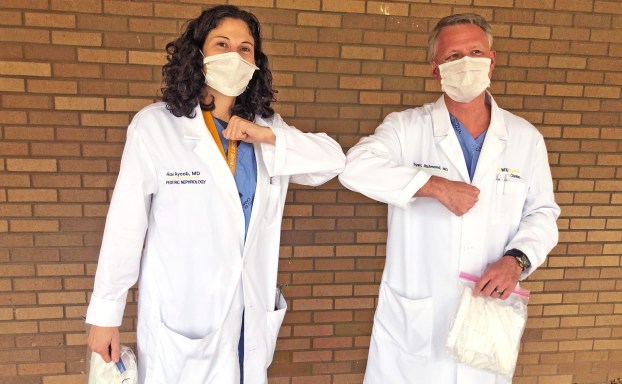 Hospital and emergency workers are on the front lines in fighting the coronavirus pandemic.

If a surge in cases occurs, the need for protective gear will be paramount, and three local teachers have been using their time while universities and K-12 schools are closed to organize and work to meet the need.

Dr. Suzanne Strait is a biology professor at Marshall University in Huntington.

Many of her students are now working in hospitals and emergency rooms, where she knew there was a shortage of protective gear for personnel.

“I felt very personally scared for them,” she said.

Working with volunteers, they created a of surgical mask and made a prototype, which she said was more effective than a cotton mask.

The design came from former student Patricia Rogers, and the “Patricia Mask” uses a high-end furnace filter, which Strait said is better at filtering viruses.

She said the masks can be constructed with pipe cleaners, twist ties and elastic material and that one filter can be used to make up to 30 masks.

They have formed the West Virginia Mask Army and their group has 10 full-time volunteers and one paid staff member from the United Way of the River Cities, with 200 people sewing.

“The community coming together is so beautiful,” Strait said.

Strait said on Wednesday that she was on a road trip to pick up an elastic donation that could be used to make 500 masks, while they have received $4,500 worth of furnace filters.

She said the masks will go to West Virginia hospitals. They are currently taking financial donations and there is an urgent need for elastic. Supplies can be dropped off at hubs in Charleston and Huntington. 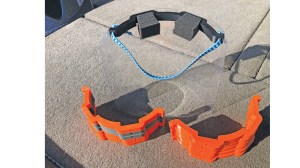 Tyler Waller, of Coal Grove, is a STEM instructor at Dawson-Bryant High School and has been 3-D printing frames for shield-type masks for medical workers. (Submitted photo)

Tyler Waller, a technology teacher in the STEM program at Dawson-Bryant High School, said he saw a need for personal protective equipment.

He said he looked online and saw a group at Eastern Tennessee University who were in the process of producing about 10,000 shield-type masks for first responders and hospital workers.

“But I noticed they were using a lot of unnecessary hardware — bolts and washers — that added excessive weight and expense,” he said.

Waller said another instructor in the STEM program, Tom Singer, put out a challenge and, using a program called Fusion 360, he designed a frame for masks that could be attached with two simple bolts and super glue.

He produces these with a 3-D printer, which he said can make up to eight a day.

“They’re simplistic and if something breaks, it’s not too expensive,” he said.

He said it was an example of the problem-solving approach of the program.

“We don’t just want to solve problems, we want to be the solution, with a little knowledge and know-how,” Waller said.

He said he has been giving the masks out as fast as he can make them. He said he would have 20 made by today and is aiming to make 30 more. 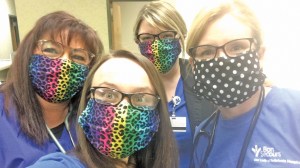 Workers at Our Lady of Bellefonte Hospital in Russell, Kentucky wear cotton masks made by Epic Stitches, by Joshua Carl, of Ashland.
(Submitted photo)

He sews as a hobby and has a Facebook page, Epic Stitches.

“I was approached by local nurses here,” he said of the need for masks.

Carl said a local native nurse, who now lives in Frankfort, launched a Facebook group, “Masks for Nurses,” and he was able to get in touch with people who are in the medical field.

Carl said he got to work sewing four-layer cotton masks.

“It’s what’s recommended by the CDC,” he said. “They’re better than the two-layer ones and are harder to breathe through.”

Carl, who has been sewing since high school, said he has been at the project for about a week and a half.

He said he can sew up to 30 a day if he works in 8-hour shifts, and has been giving them out to anyone who asks for one.

He said he has spoken to several companies and emergency rooms.

“The shortage is huge,” he said, saying the need is not immediate, though an expected surge will make it the case.

Carl said he has 250 requests so far, and is trying to secure more elastic, which he said is the hardest of the needed materials to come by.

Art in the time of COVID-19

Toilet paper, Hand sanitizer and Prescriptions — these are not the most common subjects depicted in works of art. But... read more