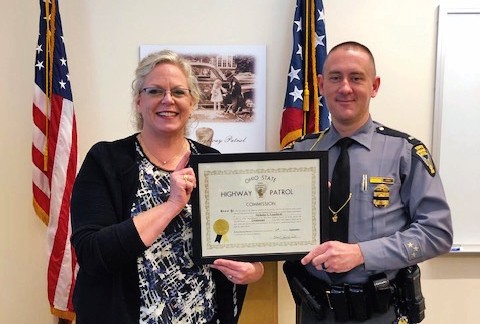 On Friday, Ohio State Highway Patrol clerk Trish Scarberry retired after 30 years at the Ironton Post. She was given a certificate by post commander Lt. Nick Lunsford for her decades of service. (Submitted photo)

On Friday, the Ironton Post of the Ohio State Highway Patrol had one of its longest-employed clerks retire after 30 years of service.

Trish Scarberry started at the post in 1990 after her husband, Rick, got a job as a coach at Rock Hill High School. She had worked at the Bureau of Motor Vehicles in Columbus and, after they relocated, she applied with the state patrol and got a job at the post in February of 1990.

Scarberry has been through several positions at the post — clerk, secretary, administrative professional— and five post commanders.

The current post commander, Lt. Nick Lunsford, has worked with Scarberry for the past decade and said they are going to miss her.

“She’s kind of carried me through 10 years, I don’t think I could have done this job without her,” he said. “She’s great at this job and it is going to be very difficult to replace her.”

He said that Scarberry always did her job with a smile.

“I’m going to be lost without her, I can tell you that,” Lunsford said.

Scarberry was over the post’s educational programs and a big part of the annual Shop with a Cop event, when all of Lawrence County’s law enforcement officers and first responders gather money to buy Christmas gifts for needy children and then take them to a restaurant for a meal.

She said events like that were to recognize and take care of the community and for the children to learn that being around officers is not always a bad thing.

“We deal with so many negatives, I think they need to see the positive,” she said. “Maybe if they don’t have a positive role model in their family, they can see a positive role model in the local law enforcement/first responders, whether it is the highway patrol, the local police department, the sheriff’s office, the fire departments or the EMS squads.”

She said the program was coordinated by all those agencies in Lawrence County, where many counties don’t do the event like that.

“I think that is instrumental in our program, that we all work together,” she said. “That is because we are all one. We are all there for the same purpose.”

Scarberry agreed that 30 years is a long time to stay in one job and “there were days I thought about never coming back,” she said, with a laugh. “There are very good people here at the post, that is one main thing. And it worked for our family.”

Her kids were involved in sports and her husband was a coach, which sometimes meant late nights returning home.

She said there was many a night when she got into bed after midnight and still got up at 5 a.m. for work.

“Like I told them, it’s going to be ugly the next day, but I’ll be here,” she said, with a laugh. “But they are very supportive of our family and our kids. That says a lot for our division, I think.”

Because of the pandemic, the post held just a little reception for Scarberry, just so her retirement was marked.

“I was told there was going to be a little cake and just a couple people are going to come,” Scarberry said. “It’s very nice of them to do that.”

There will be a bigger party later on.

“Once the restrictions are lifted, we plan on having a formal retirement reception for her,” Lunsford said.

Hospital and emergency workers are on the front lines in fighting the coronavirus pandemic. If a surge in cases occurs,... read more