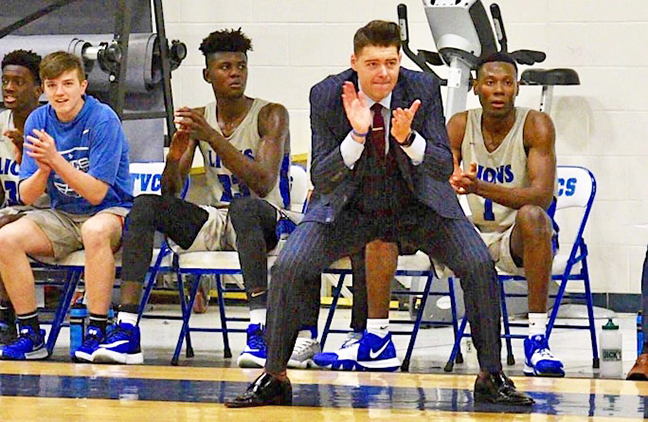 RIO GRANDE, Ohio — The University of Rio Grande’s national search for a new men’s basketball head coach ended up taking a circuitous route to where it began.
The school announced the hiring of Ryan Arrowood as the new bench boss of the RedStorm Tuesday evening.
Arrowood, a former player and assistant coach at Rio, spent the past five seasons as the head coach at Teays Valley (WV) Christian School where he compiled a 102-44 record.
He replaces Ken French, who was relieved of his duties after 14 seasons following the conclusion of the 2019-20 campaign.
“For anybody who plays a sport in college, to come back home is always a dream. For me, this is absolutely a dream come true,” Arrowood said. “I have amazing memories of Rio, not only as a player but as a coach. Now, to be there as the head coach, I couldn’t be more excited.”
Arrowood, a graduate of Hannan High School in neighboring Mason County, W.Va., where he was a two-time Class A all-state selection, began his coaching career as an assistant at his alma mater for the 2006-07 season.
He took over as head coach of the Wildcats for each of the next two seasons before returning to Rio Grande to serve as an assistant coach and the junior varsity head coach from 2009-11.
Arrowood’s return to Rio also saw him complete bachelor’s degrees in both Physical Education and Health Education in 2009 and a master’s degree in Educational Leadership in 2011.
“We’re happy and excited to welcome Ryan back to the Rio family. His energy and passion will bring a renewed sense of excitement to Rio basketball,” said Rio Grande athletic director Jeff Latham. “His knowledge of the Rio basketball tradition as a former player and coach, in addition to the coaching experience he has, made him an outstanding selection.”
Arrowood also spent one season as an assistant coach at now-defunct Mountain State University and three seasons at national high school power Huntington (WV) Prep before taking the head coaching position of the new national high school program at Teays Valley Christian.
During his tenure with the Lions, Arrowood’s teams posted seven wins over teams ranked in the national Top 25. His squad was ranked as high as No. 23 in the USA Today Super 25 in 2019.
Over the course of his coaching career, Arrowood has coached five players who are currently on or who have been on an NBA roster, in addition to three McDonald’s All-Americans.
Still, the opportunity to return to Rio Grande yet again was one that Arrowood said he couldn’t pass up.
“When we had kids come in (at TVCS) I told them that there was probably only a couple of jobs that I’d leave for and Rio Grande was always at the top of that list,” he said. “But I’m proud of what we’re leaving at Teays Valley – the top nine in the rotation from a team that won 20 games and a team that’s probably going to be in the preseason Top 25. I made some amazing memories and some great relationships there, but this is once-in-a-lifetime opportunity for me. I really couldn’t see me leaving Teays Valley for any other job outside of this one.”
Arrowood’s biggest immediate obstacle might be filling a roster.
Two seniors from the 2019-20 team – forward Greg Wallace and guard Hadith Tiggs – concluded their respective collegiate careers, while a number of other would-be returners – including sophomore guard Gunner Short, the team’s leading scorer – asked for, and were granted, their releases to explore opportunities elsewhere following French’s dismissal.
Further compounding the task at hand are the restrictions that come with the ongoing Coronavirus pandemic.
“The first thing I’m doing is talking to the current players. I’ve still got a couple to I need to speak with, but that’s job one right now – finding out who’s with us and then building a relationship with them,” he said. “In a normal situation, we’d be able to start working on things right away, but we can’t make those one-on-one connections at this point because we’re not on campus. It’s not a perfect situation, but it’s the situation we’ve got.”
Once the RedStorm finally takes the floor, what style of play can fans expect to see?
“Whatever we need to do to win,” said Arrowood. “If you look at our conference, you’d better have the horses to do it if your plan is to try and run with teams like West Virginia Tech. The system I run is based on fundamentals and we’ll look to control tempo, regardless of whether that’s fast or slow. Basketball’s not necessarily a complex game, it’s just hard to execute at times.”
Lanham added that he’s confident that Arrowood can provide a shot in the arm to the program.
“Ryan possesses many important qualities that we were looking for in a new head coach,” he said. “He has an unmatched passion for Rio athletics, he’s full of energy and he’s a dynamic competitor. Ryan’s a proven winner as both a player and a coach, as well as a strong believer of the development of the student-athlete’s character being the most important aspect of the position.”