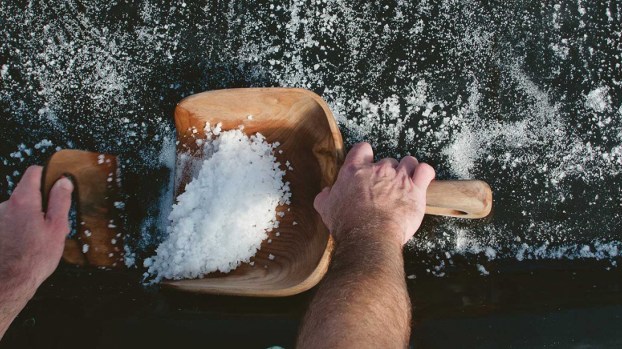 The salt that Bruns’ enterprise produces comes from a 400-million-year-old ancient ocean deep beneath the ground. (Photography by Lauren Stonestreet)

From mine to table

MALDEN, W.Va. — Nearly 200 years ago, Nancy Bruns’ forefathers mined salt on land near Charleston, West Virginia. Today, on that same land, she’s carrying on the tradition and introducing a new generation to artisanal salt from deep beneath the Appalachian Mountains.

Bruns is the founder and CEO of J.Q. Dickinson Salt-Works in Malden, West Virginia.

The salt that Bruns’ enterprise produces comes from a 400-million-year-old ancient ocean deep beneath the ground.

“It runs under us like a salty river,” Bruns said. “So, it’s very protected from surface contaminants that may get into our surface oceans. So, there are no pollutants. It’s a very consistent, mineral-rich brine.”

The company uses solar evaporation to turn the brine into salt. The process takes about six weeks in a handful of “sun houses,” throughout the property.

“[Sun houses are] like [green houses] you would see on a farm growing green things, but we call them sun houses,” Bruns said. “We just magnify the power of the sun and they get close to 150 degrees on a hot, sunny day, and evaporate that brine down to produce salt crystals.”

The solar process has a small environmental footprint, which is important to Bruns, she said.

“We feel that with the quality of the brine as well as our environmentally-friendly process that we have a very unique, tasty salt,” she said.

Salt production was one of the first industries in the Kanawha Valley. Bruns’ fourth great-grandfather, William Dickinson started in the industry in 1817.

The operation moved to its current land in 1832, where it produced salt until 1945. The company extracted minerals from the brine until the mid 1980s, when it shut down completely.

Bruns’ interest in artisanal salts started while she worked in the food industry for the first half of her career.

“I started collecting them and I just thought it was just fascinating the different textures and flavor profiles and different salts from different places and how they interacted with food,” she said.

As Bruns was selling a restaurant in North Carolina, she started to learn about her family’s history in the salt industry. She began to see an opportunity to get into the industry.

“With the farm-to-table movement, chefs and consumers really want high-quality, regionally produced products,” she said. “I saw an opportunity to start the salt works back again.

“So I called my brother, and we did a lot of research on it, and a lot of work and then started it back. And the rest is history, I guess.”

J.Q. Dickinson Salt-Works put in its well in Spring 2013 and sold its first salt batch in October that same year.

Today, its artisanal salt can be found in 650 stores, including about 100 in West Virginia and several in Ohio and Kentucky. A complete list of where to purchase J.Q. Dickinson Salt can be found under the “Stockist” section of the business’s website, jqdsalt.com.

Its products include a medium-crystal finishing salt, and a finer crystal cooking or popcorn salt. There are also flavored salts that include ramp salt, applewood smoked salt and a bourbon barrel smoked salt.

Tourists who visit the company’s 40-acre farm from April through November can see first-hand how the brine is mined and the salt produced.

The business offers free tours and an experiential tour for $15. On the experiential tour, visitors can harvest and take home their own small jar of the salt scrawled with their name and the date it was harvested.

“[The tour] takes you through our whole process and you learn a lot about the history of the salt industry in the Kanawha Valley and what it really meant for the state,” Bruns said.

“[It was] really the state’s first industry, which Kentucky and Ohio had quite a few salt producers as well.”

No reservations are needed for the tours, which are offered on the hour and half hour between 10 a.m. and 4 p.m. Monday through Saturday. This year, the first tour date is April 18. Tours end for the year around Thanksgiving.

Bruns said while the 40-acre farm is only 10-miles from downtown Charleston, it offers visitors a quiet escape from the city.  The business also has a gift shop where visitors can buy local products.

“We do tastings of all of our products,” she said. “We offer beer and wine and other drinks, if you want to take them on the tour with you. People hang out on the porch and enjoy the landscaping and just the peace and quiet of being in the country.”

Visitors have come from as far away as Germany and Finland, she said.

“People seek us out if they’ve heard about us [or] they’ve ordered from us and they happen to be coming through the area,” she said. “They’ll make a point to stop by and see us.”

Once a month from April through November, J.Q. Dickinson Salt-Works hosts farm-to-table dinners. Chefs from all over the region prepare locally sourced food. The proceeds from the dinners benefit a different food farm or healthy lifestyle initiative in the area each time.

The newest branch of the business is a subscription box of regional products called “Appalachian Mercantile” that people can purchase monthly or seasonally.

“It’s just kind of an out chute of what we were already doing,” she said. “And I feel like it’s a way to share the high-quality things that are going on in Appalachia with the world.”

The business has a gift shop where visitors can buy salt and other local products. Its salt is used in other regionally produced products like Virginia Cocktail Peanuts, Route 11’s salt and pepper flavored potato chip and Parkersburg-based “In a Jam” jams and jellies. Bruns said it’s important to support other local businesses, especially in a place like West Virginia that’s struggling to transition from a coal-based economy.

“We love those kinds of partnerships too,” Bruns said. “So we carry all those products as well.”

Most people pop up to their attics looking for finds for their next garage sale. When the staff at the... read more