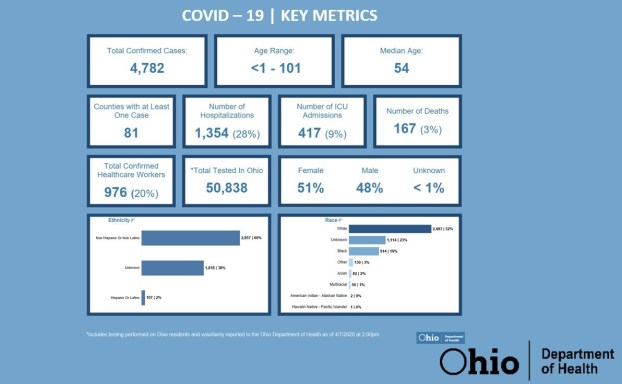 COLUMBUS — Ohio Gov. Mike DeWine addressed the issue of overcrowding in the state’s prisons during the COVID-19 pandemic and said some inmates are being targeted for an emergency release.

“Prisons pose a unique issue in this pandemic,” he said. “Social distancing in the general population is helping us flatten the curve — but for prison inmates and staff, social distancing becomes much more challenging.”

In order to protect staff and inmates, DeWine said his administration asked judges to consider the early release of 38 select offenders, 23 pregnant or postpartum women and 15 inmates, ages 60 and up, who are already approaching release within 120 days.

“Since then, my team has continued to carefully analyze our prison population,” he said.

DeWine said, as the emergency makes the situation more urgent, he was announcing that they are moving forward with this process and are notifying the CIIC of overcrowding in our prisons.

“To help relieve this situation, we believe that there are specific inmates who could qualify for release who are already scheduled for release within the next 90 days,” he said.

DeWine said they are narrowing down the list by first looking at those who are set to be released within 90 days, and then they eliminate those who were convicted of serious charges such as sex offenses, homicide-related offenses, kidnapping, abduction, ethnic intimidation, making terroristic threats and domestic violence.

“Finding inmates to release from prisons to create more room for social distancing isn’t easy,” the governor said. “We have around 49,000 people in our prisons today and they’re there for a reason.”

He they also screened out those who have been denied judicial release in the past, have prior incarcerations in Ohio, are interstate offenders, have warrants or detainers and those who have serious prison rule violations in the last five years.

“That left us with 141 inmates who qualify for emergency release under Ohio’s Overcrowding Emergency statute and have a release date on, or before, July 13, 2020,” DeWine said. “These inmates are all in our minimum-security prisons. Prisoners in these facilities live in “open bays” with 80 to 300 people in a large open room. They sleep in bunks with three feet or less between them. Because of this set-up, there is potential for the fast spread of COVID-19.”

DeWine said there was much consideration in the decision and the protection of the public, staff and the prison population were all prioritized.

“Overall, these are all tough decisions,” DeWine said. “We are trying to take a measured and reasonable approach that protects the public and tries to minimize the spread.”