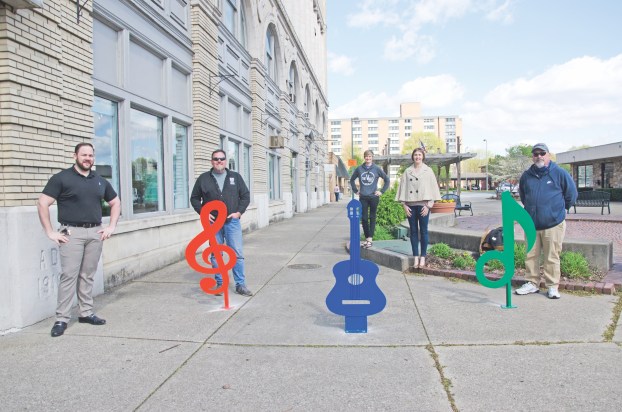 The installations were funded from a grant the nonprofit Third and Center received from The Ohio Arts Council.

“We collaborated with kids in the welding class,” Abby Kuehne, of Third and Center, said.

Kuehne co-owns The Vault Market with Amanda Cleary located next to the fountain.

She said it was the group’s aim to take advantage of the plaza area around the fountain.

She said the group hopes to do similar projects in the future.

Kuehne and Cleary have hosted two outdoor events in the plaza — a pre-show for last year’s Ohio River Revival Festival and a Market After Dark.

She said they had planned another Market After Dark for May, the one year anniversary of The Vault’s opening, but, due to restrictions on gatherings because of  the coronavirus, they are pushing it back until later in the year.

conversation, connection and collaboration amongst those desiring to positively impact their community.

The metal bike racks were created by welding students under Dave Davenport at CCTC.

Keuhne said they tweaked the designs a bit prior to their making and it was a back-and-forth collaborative process.

One, a red stand, is in the shape of Ohio, with a heart in the center and features a cut-out circle marking Ironton’s location, giving an additional place to lock a bike.

The others, blue, green and red are music themed, in the shape of a guitar, a music note and a treble clef.

Kuehne said the music theme is fitting, as the building located at the site before the Masonic Building, which houses The Vault and other stores, was an opera house.

“I think it’s awesome what they’re doing down here,” he said of Third and Center’s efforts, stating it is great to see the area brought to life. “It’s not just the city. It takes citizens and business owners to make it work.”

In response to the economic challenges presented by the COVID-19 novel coronavirus, as well as the change in recent years... read more