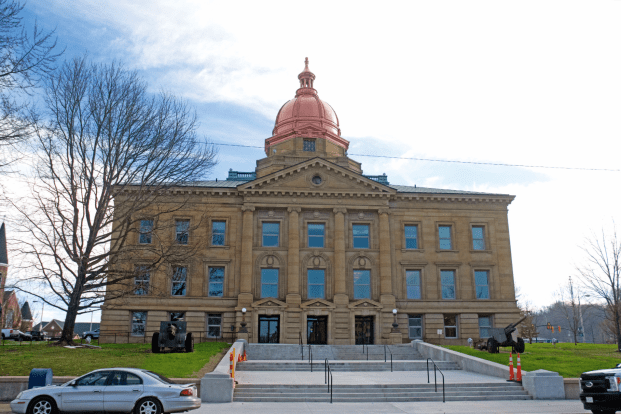 Because the state is limiting gatherings as a measure to prevent the spread of the coronavirus, the courthouse is taking measures to keep the public safe and to keep doing public work. (The Ironton Tribune | Mark Shaffer)

The Lawrence County Common Pleas Court is reducing hours and the grand jury won’t hear cases for another two months due to the coronavirus pandemic.

But Lawrence County Prosecutor Brigham Anderson said that his office is still working five days a week and criminal cases are still being heard.

The Lawrence County Common Pleas Court is now doing two half-days and one full day a week, with a half day on Monday, a full day on Wednesday and a half day on Friday. That is a reaction to social distancing. Most courts are only allowing court staff, the case’s attorneys, the defendant, the plaintiff and witnesses. Family, friends or supporters are not allowed in the courthouse. In fact, most of the essential public services in the courthouse are by appointment only.

“On the criminal side, we are having necessary hearings only,” Anderson said.

“Their court schedule is also limited to necessary cases as well,” Anderson said.

He said the prosecutor’s office is still open five days a week.

“We haven’t shut down at all, we haven’t altered our hours at all because we are still very active in responding to criminal complaints that are filed every day,” Anderson said. “We still have to determine when to file criminal charges. We still have our job to do, so we haven’t reduced our hours.”

Grand jury was canceled for March and April too.

“They were canceled because the stay-at-home order has been extended through April,” Anderson said.

Anderson said that for the prosecutor’s office, they are “at a standstill.”

Under normal circumstances, the office has about between 150-200 hearings every week.

“Now, we are probably doing 25-50,” Anderson said. “So, we are going to have a tremendous back log. For cases slated to be heard by the grand jury, we probably have 50-75 cases right now. And that doesn’t include all the cases that are active in the courts.”

He said that hopefully, sooner rather than later, the state of emergency gets lifted by the end of April or May and they can get back to work.

“We are going to be very busy when this is over,” Anderson said.

The U.S. Supreme Court has ruled that criminal cases have to be heard “in a reasonable time” if the defendant is in jail. Normally, the right to a speedy trial is 90 days in Ohio.

Due to the pandemic, the Ohio legislature “tolled” the right to speedy trial until July 31, meaning that the time between being charged and the trial is suspended.

“Ohio changed that, statutorily, during this period and I think that was the right thing to do. It is well within Constitutional limits,” Anderson said.

In an effort to keep community spirit alive in the time of the pandemic, the City of Ironton has issued... read more