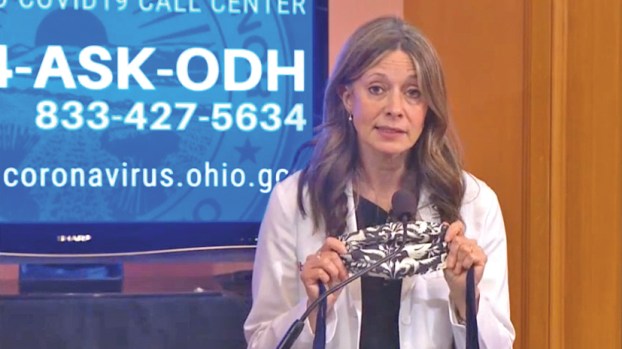 Ohio Department of Health Director Amy Acton holds a cotton face mask at a news conference on the coronavirus on Monday. (Screengrab)

COLUMBUS — The subject of nursing homes and prisons dominated Monday’s update on the coronavirus by Ohio Gov. Mike DeWine.

The governor announced that he is requiring that all long-term care facilities in the state publicly report if a resident or staff member tests positive for COVID-19.

The governor said most facilities had been self-reporting such information, but Monday’s order makes it a requirement.

DeWine said a list of facilities with positive cases would be posted on the Ohio Department of Health’s coronavirus website at coronavirus.ohio.gov.

The decision was a reversal by the state and DeWine said the change came directly from him.

“You have every right to know what situation is there,” he said of the change in reporting.

Dr. Amy Acton, the director of the Ohio Department of Health, said Ohio had 6,975 confirmed COVID-19 cases on Monday, with 274 deaths reported.

Acton said the overall trend has shown a flattening.

“The good news is we’re staying flat,” Acton said. “We seem to be having a very flat, steady peak. The five-day trend is staying very steady.”

But Acton said the situation was still an emergency.

“It is still tough out there,” she said. “Especially our congregate settings, such as nursing homes and prisons. This is very contagious and deadly and spreads quickly in those settings.”

DeWine said the state saw its first death from coronavirus in the prison population over the weekend, an inmate in Pickaway Correctional Institution.

“This inmate was suffering long-term, chronic illness and passed away over the weekend,” he said. “The test result came in Monday positive for COVID-19.”

Another change announced Monday was that DeWine is barring sales of liquor in counties bordering Pennsylvania to non-Ohio residents.

The governor said that, as Pennsylvania and some counties in West Virginia had closed liquor stores, these border counties, Ashtabula, Trumbull, Mahoning, Columbiana, Jefferson and Belmont, had seen an influx in out-of-state travelers purchasing alcohol.

DeWine said he had received repeated complaints from chiefs of police about the situation and that, in addition to an ID, proof of residency must be shown to purchase alcohol in those counties.

“This is something we will continue to monitor, he said. “If additional counties appear to have a significant influx from out of state, we will take whatever appropriate action is needed.”

The governor also thanked the Ohio General Assembly for approving funds on Monday for hospitals in the state.

DeWine said the funds would be used to purchase ventilators and masks and would be in addition to federal money received.