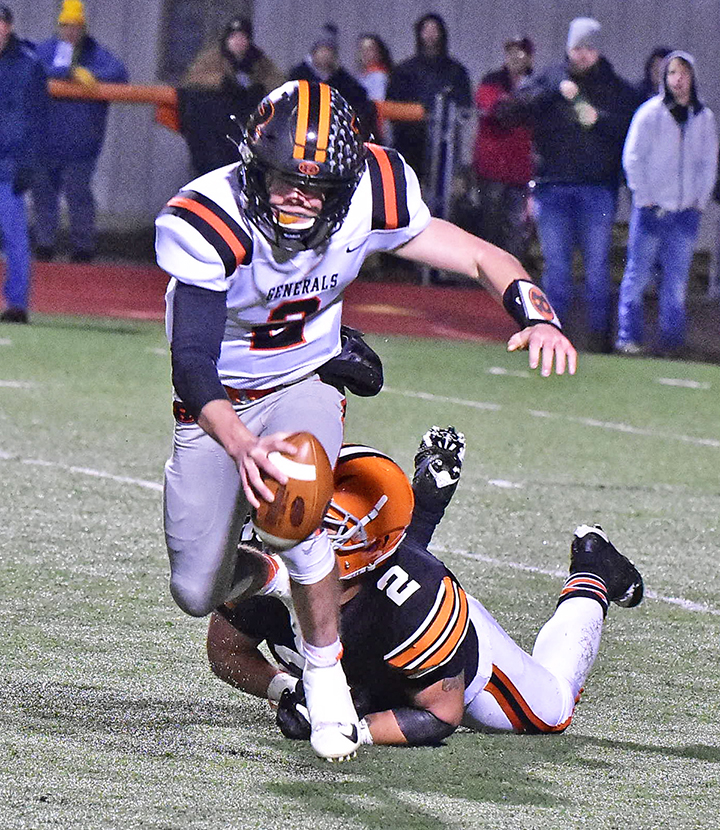 The good, the bad and the ugly.
No, this isn’t the name of a Clint Eastwood movie. It describes Junior Jones’ senior football season.
The good was the season that saw the Ironton Fighting Tigers go 13-2, win the Ohio Valley Conference title and reach the Division 5 state championship.
The other good was Jones not only being named to the Associated Press Division 5 Southeast All-District first team, but he was also named third team All-Ohio as a defensive lineman.
The bad was a heartbreaking 17-7 loss to Kirtland at Canton’s Hall of Fame Stadium in the championship game.
Even that state championship loss couldn’t wash away the success and memorable moments of the season.
“It was a great experience. It was a great game,” said Jones.
Some more good news helped erase some of the disappointment when the Ironton defensive lineman and fullback was named to the Ohio High School Football Coaches Association’s annual North/South All-Star Game as a member of the Divisions 4-7 South team.
“I was ecstatic. I was really overwhelmed. I was just happy, honestly,” said Jones.
The game was scheduled for Saturday, April 25, at Paul Brown Tiger Stadium in Massillon
But then the ugly reared its head.
When the Coronavirus began to slither its way across the country causing a national shutdown of schools, sports, concerts and non-essential business complete with social distancing.
And that meant the All-Star Game was canceled.
“I’m kind of upset because it potentially could be my last game ever,” said Jones. “It was going to be good to be around all kinds of good players. I’ve never been in anything like that.
“We didn’t practice any together. We were going to practice. I would have had to go up there the 18th or 19th. It would have been a good time.”
Now, after digesting the situation, Jones has shown maturity by turning his dream into reality.
“I understand what’s most important in this world, so that’s alright. I think that it wouldn’t be smart to play a game with the conditions that we’re in right now. It is what it is,” said Jones.
Another “bad” came into play with the cancelation of the all-star game that also disappointed Jones.
“The other thing I was hyped about was it is the 75th (All-Star) Game and they were going to let us keep the jerseys. They had a (commemorative) patch and everything,” said Jones.
When it was suggested that the OHSFCA should give the jerseys to the players anyway as a consolation gift since the players wouldn’t get to play in the game, Jones grinned.
“That would have been pretty awesome. If they do, it’ll be like Christmas,” said Jones.
Besides his numerous sacks, Jones also had two interceptions from his defensive end position. He said his “shoelace sack” of West Lafayette Ridgewood quarterback Gage Tingle in the regional championship game was his best personal highlight.
“To be honest, I was just really glad I got to come over to Ironton,” said Jones who played at Ashland (Ky.) Paul Blazer the past two years.
“I got to meet some new guys, build some relationships and everybody there will be family for life. I’m just glad we had a good season and made a good run. We didn’t finish how we wanted to, but it was a heck of an experience. We fought to the end. It was a great season.”
Jones has been offered a preferred walk-on spot as a fullback at Youngstown State but he said he’s still uncertain about his future plans and has been talking with family about a potential landing spot.
“Youngstown gave me a preferred walk-on spot, but I’m not sure what’s really going on right now,” said Jones.
The North-South Game was also an opportunity for Jones to showcase his talents and maybe be offered a better situation.
“That was another thing I was really upset about, but now it’s not going to happen. I was going to get out there and compete against some really good high school athletes and show them what I’ve got,” said Jones.
“They had us introduce ourselves (at the banquet) and everyone was going to a powerhouse college, so it kind of bums me out a little bit.”
The 6-foot-, 240-pound Jones said it has been hard to stay in shape with no training facilities available.
“I’ve bought some things and I have them here at home. I’m doing as much as I can,” said Jones.
Sounds like Junior Jones is taking the bad situation and trying to make it good and there’s nothing ugly about that.

Fairland Dragons’ boys head basketball coach Nathan Speed talks to his team during a timeout. The Dragons were in the... read more