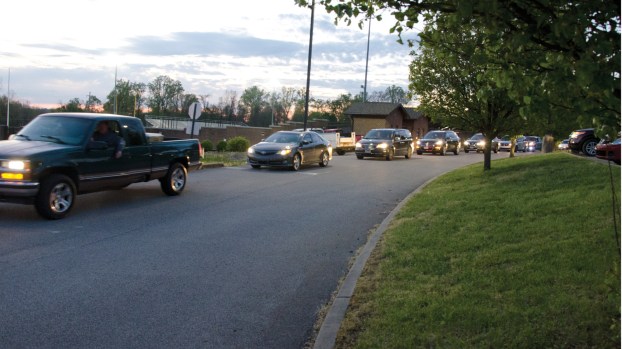 Field lights turned on for 20 minutes and 20 seconds

SOUTH POINT — With closures and social distancing in place, school districts across Lawrence County paid tribute to this graduating class of seniors.

Field lights were turned on at several high schools, for 20 minutes and 20 seconds, in a show of support for those missing out on graduation ceremonies due to the COVID-19 pandemic.

At 8:20 p.m., just as the sun was setting, the lot was filled with vehicles at South Point High School as carloads of seniors and their families drove the route circling the campus and horns blared.

It was the first time many of these students had seen each other since Gov. Mike DeWine ordered the state’s K-12 schools closed on March 13, due to concerns over the spread of coronavirus.

Many waved at each other and shouted greetings from windows and truck beds, interacting as much as they could while maintaining distance.

“Class of COVID!” one shouted, getting cheers back from students in another vehicle.

Earlier in the day, the governor announced that schools would not be reopening for this academic year, a move not unexpected, but dashing any remaining hopes of graduation ceremonies in coming weeks.

Some families without graduating members watched from the lot, offering their support to the class.

One group was the family of Tony Crisp, who said he has a daughter, Emily, who goes to the school.

Crisp said his family volunteers for many activities at the school.

“We help a lot with the band and kids,” he said.

He said he was heartened by the turnout.

“It’s good that they’re trying to give these kids something since they’re missing their graduation,” he said.

Superintendents told The Ironton Tribune on Monday, following DeWine’s announcement, that they would be brainstorming to try to come up with some way to hold a social distancing-compliant ceremony for graduates, even if it meant waiting until summer.

DeWine said it was too early to make a call on the 2020-2021 school year, but the governor said it is possible students returning in the fall would be educated through a hybrid of both remote and in-person learning as the pandemic continues.

Crisp said, unfortunately, students may have to “get used to it” with the restrictions.

“The repercussions of this may be with us for a long time,” he said.