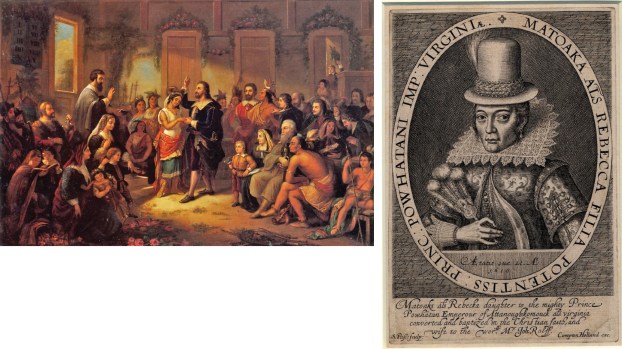 ABOVE: “Marriage of Pocahontas to John Rolfe,” an 1855 painting by Henry Bruckner RIGHT: A 1616 engraving by Simon Van de Passe is the only known from-life portrait of Pocahontas. Considered the only credible depiction of her, it was made when she was England shortly before her death. (Public domain)

Those people we call Native Americans came to the Americas between 20,000 to 40,000 years ago. These Asians left Siberia and would evolve into our Native Americans in North, Central and South America.

They either walked across a land bridge connecting the two continents, pulled sleds over ice sheets or came in animaln skin boats. They would inhabit the Americas for thousands of years before any Europeans came. It is thought they came following the animals they hunted.

These Native Americans would be classified in tribes, hundreds of them, based upon the languages they spoke. There are, at present, 10 major Native American language groups.

The first Europeans to see the Native Americans were the Norwegian Vikings. Between 1000 A.D. and 1003 A.D. Leif Ericsson led a party of Vikings to the extreme north of Newfoundland.

He called the landfall “Vinland,” because of the grapes he saw there. Vikings saw Native Americans here and termed them “Skrellings,” meaning “wretched people.”

By 1450, all of the Viking settlements had disappeared in North America. The settlements failed because there were too few Vikings to maintain a colony. Also, the Native Americans could have forced them to leave.

Most plausible is the change in climate.

Scholars say the western Atlantic witnessed a “Little Ice Age,” which prohibited Norse ships from coming from Iceland and Greenland. The history of North America would be the same with or without the Vikings.

Christopher Columbus left Spain on Aug. 3, 1942. He believed if he sailed west, he would find the riches of China, Japan and the East Indies. He did not know there was a “New World.”

After 70 days at sea, he landed upon Watling Island in the Bahamas. He believed he had made landfall in the East Indies. Thinking such, Columbus called the natives he encountered

“Indians.” Future voyages would see the Spanish try to enslave the natives. The natives, however, would prefer death to being enslaved — a “fixed melancholy.”

New France occupied that area from the lower St. Lawrence River, the Great Lakes and all of the Mississippi Valley.

New Netherland was established in 1613 by the Dutch and consumed lands bordering the Hudson River and the lower Delaware River.

New Sweden was a Swedish colony on the Delaware River that the Dutch conquered in 1655. The Russians discovered Alaska and claimed lands southward toward California.

Early European explorers and trappers were interested in securing furs from the Native Americans and also fished the Atlantic to procure a supply of fish for the Catholics of Western Europe.

The Spanish sought gold and silver and felt they must introduce their Catholic faith to convert the natives.

At first, the natives of the Americas and the Europeans were friendly. As more settlers came to the Americas, they took more native lands. It was inevitable that fighting would break out.

The Indian Wars began when the Vikings came to North America and ended in 1900. As more Europeans came to the Americas, they had large families. They would, in time, outnumber the natives, claim native lands and push the natives westward. When Europeans first landed in the present United States, there were one million natives. Disease also decimated them.

The land stretching from present-day North Carolina to New England was known as “Virginia” — land of the Virgin Queen. This area was thought to be a laden with gold and other precious minerals. Also, Virginia was thought to be the entrance to the Northwest Passage that would lead to the riches of the Far East.

Queen Elizabeth I, who died in 1603, was followed by James I. He chartered the Virginia Company of London in 1606 to plant a colony between the 34th and 41st northern parallels. This joint-stock company raised capital by selling shares of stock to investors who hoped to profit from the riches of Virginia. This Virginia Company chose the Chesapeake Bay area to colonize.

A total of 144 crew members and settlers left England for Virginia in December 1606 aboard the Godspeed, Discovery and Susant Constant. It took the 105 settlers 144 days to reach their objective on May 24, 1607.

More than one-third of the settlers were gentlemen investors who came to get rich and return to England. Not used to physical exertion, many would never see England again. There were no women — just men and boys!

Watching them come ashore was an important tribe, the Algonquins. These natives were part of the Powhatan Confederacy, consisting of 30 separate tribes and 9,000 natives. These natives resided in what became the colony and state of Virginia. Their chief was Wahunsonacock, called Powhatan by the colonists. Powhatan befriended the colonists, but they would demand native food and moved westward onto native lands.

Powhatan had a young daughter named Matoaka. The colonists called her Pocahontas, meaning “Playful One.” She also is referred to as a “Savior of Jamestown.”

The leaders of the Virginia Company of London selected seven gentlemen as the settlement’s governing council. The seven names were sealed in a box not to be opened until they landed in Virginia. The leaders selected a marshy peninsula linked to the north shore of a river. The colony, river and stockade were named after James I, the English king.
Summer heat, contaminated wells, native attacks and a drought decreased their numbers. Dysentery, typhoid and salt poisoning became major killers. The colony’s leaders argued with each other and wanted to avoid cooperative labor and return to England. Only 38 settlers survived the diseased and native attacks. The longevity of Jamestown depended on the aid of the natives.

Pocahontas would take food to Jamestown against her father’s wishes.

Capt. John Smith, who had come ashore under arrest, began to barter with the natives throughout the fall of 1607. Smith used threats, along with trade goods to keep the colony alive. In Sept. 1608, Smith attained leadership of Jamestown and instituted a policy stating that one who did not work would not eat.

Having been injured, Smith would return to England in October 1609. His leadership was absent during the “Great Starving Time.” He also would be called a “Savior of Jamestown.” He never returned to Jamestown. By 1609, Powhatan had stopped all trade with the settlers.

Winter brought great suffering among the settlers. They ate horses, rats, cats, dogs, their boots, snakes and wild roots. One colonist murdered his wife, tore the child from her womb, chopped his wife in pieces, salted the pieces and ate some of the body parts. The husband was executed after being tortured. This experience, the “Great Starving Time,” lessened their numbers to 60 after winter of 1609-1610. Relief would come via a supply ship from England.

In 1613, Capt. Samuel Argall kidnapped Pocahontas and took her to Jamestown. She was placed with Reverend Alexander Whitaker at Henrico, upriver from Jamestown. She was instructed in the Christian faith and taught the manners of an English lady. She would be baptized and was given the name “Rebecca.”

While detained, Pocahontas met John Rolfe and they were married April 5, 1614. Powhatan did not attend the wedding, but sent his sons. This was a most important wedding, because

Jamestown saw eight years of peace. One year later, the Rolfes had a son, Thomas, who was prominent in Virginia history as an adult.

John Rolfe developed a sweeter tasting tobacco after experimenting with seeds from Trinidad and Caracas. Rolfe’s best tobacco was exported to England and was used as cash in Jamestown.

Ships came to Jamestown to load up tobacco. The sailors traded goods and indentured servants for the “golden weed.”

The only women at Jamestown prior to the success of tobacco were a few wives of the rich investors and some young servant girls. In 1619, the company’s board sent 90 “young, handsome, chaste, poor maidens and widows” to Virginia for the 1,000 wifeless male settlers. To procure such a wife, a man had to pay the company 125 pounds of quality tobacco.

The company decided Pocahontas, her husband and child should come to England. They arrived in the spring of 1616. King James I disliked women and hated the use of tobacco. Because Rolfe had inspired the growth of tobacco in Virginia and was a commoner, he was totally excluded from all ceremony and royal activities in England. Pocahontas was the center of attention and even played cards with Queen Anne. John, being totally ignored, grew homesick. Three of the Rolfes’ party (servants) died. The natives were not immune to the dampness and diseases of London.

Smith came to visit Pocahontas and bragged that he was responsible for civilizing her. The Virginia Company promoted John Rolfe to secretary of Jamestown and he was eager to leave England.

When their ship reached Gravesend, 22 miles from London, Pocahontas had a fever. She was placed in bed at an inn and died of smallpox in March 1617. She was buried in an unmarked spot under the floor of the Saxon Church. The rector misspelled her name. John Rolfe left his son, Thomas, with relatives in England.

In 1676, Nathaniel Bacon burned Jamestown to the ground. In the 1950s, the Powhatan tribe died out.

Even though she died very young, Pocahontas remains the single most famous native American during the early years of European settlement in North America.

COLUMBUS — This week, the State of Ohio is reminding drivers to pay more attention to when they are driving... read more