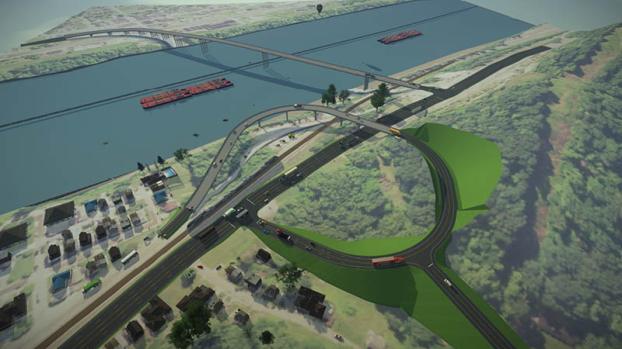 This image from the Kentucky Transportation Cabinet shows the “flyover” design for a new bridge to be built starting May 4. The artist’s rendering is not to exact scale and does not necessarily depict actual landmarks or final traffic lane markings, etc. Highway running to the top right is U.S. 23 toward Ashland, and bottom left is U.S. 23 toward Flatwoods and Greenup. At bottom right is KY 750-Kenwood Drive. (Credit: AECOM engineering, the Transportation Cabinet's consulting engineers on the viaduct replacement project.)

Russell to get new bridge

RUSSELL, Ky. – Those traveling to downtown Russell, Kentucky will have to find an alternate route as the old viaduct bridge will be closed starting May 4 for the construction of a new “flyover” bridge.

“At a time when we are concerned about the health and well-being of all of our fellow Kentuckians, we are also keenly aware that we must continue to work toward a brighter day,” Kentucky Transportation Secretary Jim Gray said. “This project is important to the people of Russell and the surrounding area, and KYTC is committed to its safe and efficient delivery.”

Engineers began planning the replacement of the Russell viaduct about 10 years ago, working with consultants, local officials and the public to develop an alternative route that would provide a safe, long-lasting downtown Russell highway connection while enhancing area traffic flow.

The “flyover” design was chosen because it not only replaces the old, deteriorating bridge, but also improves area traffic flow by removing KY 244 from the now-congested intersection of U.S. 23 and the Ironton-Russell bridge.

Both intersections on U.S. 23 – the Ironton-Russell bridge and the new KY 244 – will be T-shaped intersections that handle traffic flow more efficiently with less delays.

The chosen alternative includes a new KY 244 approach at Kenwood Drive north of the existing KY 244-U.S. 23 intersection at the Ironton-Russell bridge.

This new KY 244 will loop westward along part of KY 750 then back to a new flyover bridge across U.S. 23, railroad tracks, and the existing viaduct on the river side to touch down where the old bridge connects to Bellefonte Street in downtown Russell.

The Transportation Cabinet has awarded a construction contract to Triton Construction, Inc., and its subsidiaries for $20,607,500. Work will start in May with hillside excavation south of U.S. 23 at KY 750, utility relocations, and concrete work for bridge piers and other components. Contractors plan to open the new KY 244 in summer 2021. The project timeline may be adjusted as necessary due to unforeseen circumstances.

“We’re excited to see this project reach its final stage,” said Steve Gunnell, Kentucky Department of Highways District 9 chief engineer. “It will provide a much-needed upgrade to the state highway system in and around Russell to ensure safe travel and support economic development for decades to come.”

Traffic changes during construction will include lane and road closures. Beginning May 4, Kenwood Drive will be closed at U.S. 23, and traffic will be detoured to KY 207 and Diedrich Boulevard for the duration of the project. Other traffic impacts will be announced as work progresses.

In June, blasting will require rolling road blocks, lane closures and other restrictions along US 23, KY 244, and the Ironton-Russell bridge. Schedules will be announced.

Access into Russell along the existing viaduct will be maintained – a key need identified by the city for emergency and commercial vehicles. However, motorists should use caution and watch for construction vehicle traffic, and be prepared for speed limit changes.

Once complete, motorists will travel north or south on U.S. 23 then turn west into the new KY 244 intersection to access downtown Russell by looping over U.S. 23 and the railroad tracks. Kenwood Drive will branch off the KY 244 loop.