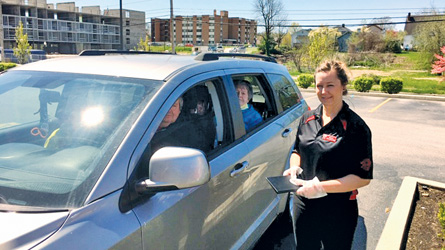 A little over a month ago, when the orders to close dining rooms in restaurants came in, it was a big punch it the gut.

“That is 75 percent of our business, just cut off in one day,” said Jerry Florence, general manager at the Ironton Big Boy. “While realizing the need for the action that does not help when you have to close your dining room.”

Ironton Big Boy had been on a great roll over the last year with several awards and sales stabilizing. They were awarded Franchise Store Of The Year through their company, Lawrence County Ohio Business Of The Year and voted Best Hamburger and Best Dessert from The Ironton Tribune.

Poised to have a great follow-up year, owners Jerry Rowe and Jimmer Howard invested extra advertising money, made upgrades to the store with a sign out front and invested in its quality staff.

Then came the order from the state to stop in-store dining. Forced to make major decisions, Florence had to find a way to help fuel the sales.

Florence was reading his Facebook messages that night and saw one guest mention the old car hop service.

“Ding, a light bulb came on right away,” Florence said. He decided the next day to come up with a car hop system that was much like the system they had from the 1950s until late 1970s.

He remembered going to car hop Big Boy when he was a kid and his mom’s first job was a car hop for Frisch’s Big Boy.

Frisch’s Big Boy, headquartered in Cincinnati, thrived during this time with its car hop service.

“In this time, we are going through it is a perfect fit,” Florence said, adding guests that have been experiencing the car hop service have had great things to say. “Right now, it is accounting for 25 percent of our sales.”

Of course, there are factors that come in to play. For instance, some people do not know what car hop service is. Also, getting the word out there and most of all, the weather. Rains seems to damper the day for this service.

“It had helped some of the servers keep their jobs,” Florence said. “I was a server once I know how it is to depend on tips.”

He said they have had to tweak some things like servers wearing gloves and keeping their distance from the guests.

To add an element of fun, the restaurant has music playing outside and also have car hop parties on the weekends with prizes for the guests.

Big Boy also continues to deliver food and has a drive-thru for guests. The restaurant also has daily specials and special offers on their Ironton Big Boy Facebook page.

“In these hard times these are just a few ways we have had to improvise.” Florence said. “In these times, it is a matter of surviving and then thriving.