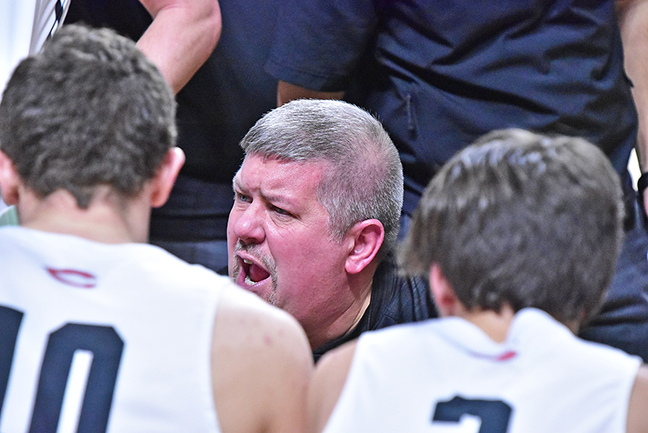 COAL GROVE — It wasn’t like letting the air out of a balloon. It was more like deflating the Goodyear blimp.
The Ohio High School Basketball Coaches Association was set to hold its annual North/South All-Star Game this weekend. But due to the COVID-19 pandemic, virtually everything has been canceled.
That left a lot of players including Ironton’s Lexie Arden unhappy with the turn of events.
But the players aren’t the only ones who had the rim removed from the backboard. Coal Grove Hornets’ boys’ head coach Kevin Vanderhoof was set to coach the Division 3-4 South All-Star team.
“I was definitely looking forward to it, but I totally understand why they had to do what they did,” said Vanderhoof.
“When it first started, I was like a lot of people. I was ready to go to the Convo and the state basketball tournament. I was pretty upset. But now you see the damage its done, you think maybe it was the right call to make.”
The Coronavirus has affected Vanderhoof beyond basketball. He has been laid-off from his job for the past month.
Being off work and then piling on the missed chance of coaching the all-star game was deflating.
“I was excited. I was shocked when they told me I was named the coach. I wasn’t expecting it at all, but I really appreciated it,” said Vanderhoof. “And then this happened.”
Vanderhoof has had some talented teams at Coal Grove the past three seasons.
He guided Coal Grove to back-to-back district championship for the first time in school history during the 2017-18 and 2018-19 seasons.
The Hornets won 19 games two years ago, one shy of the school’s regular season record for wins.
Vanderhoof was intrigued by the idea of having an all-start lineup and bench to coach.
“I’ll was just going to roll the ball out there and try and stay out of their way,” Vanderhoof said with a laugh. “It would have been interesting.”
Vanderhoof had planned to take his wife, Melanie, two daughters, twins Kasey and Kalli, and son, Luke, with him to the weekend event. His wife said there was one bright spot in not being able to attend the North/South Game.
“My wife told me, ‘At least the girls get to keep their perfect attendance,’ because they would have missed Friday. I would have taken Luke with me. They said we were supposed to be there by five (o’clock) on Thursday,” Vanderhoof said with a laugh.
Although the cancellation of the game means the seniors special moment is gone, Vanderhoof is hoping he gets a second chance.
“I hope that next year they say we’re going to let the same guys coach again. I don’t want to rob someone else of the chance. But I haven’t heard anything,” he said.
However, Vanderhoof said he was more disappointed for the seniors than himself.
“I hate it for our seniors, not just the ones picked for the all-star game. I know one kid we have at Coal Grove the only sport he plays is baseball. He’s worked in the gym, on the field, he’s working our four or five days a week on his own and he doesn’t get to play,” said Vanderhoof.
“Coaching the game is an honor for me, but it’s a big honor for the seniors selected to play. And look at what all the seniors miss. They miss out on prom and graduation and all those other memories you get when you’re a senior. If you think about it, most of the kids who are seniors were born in 2001 which was 9-11. They came in with a big thing in history and now they’re getting out of school in an unprecedented time in history.”
Vanderhoof said he has his summer schedule already completed.
“I can’t wait to get back to basketball. I hope we get the opportunity to do something this summer,” he said.
Besides basketball, Vanderhoof is hopeful he can to return to work in the near future.
“I know my wife is ready for me to go back to work,” he said.