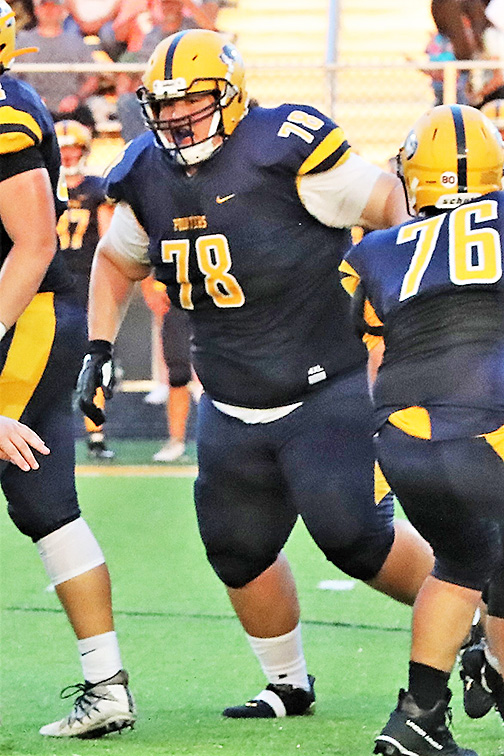 SOUTH POINT — At the end of the movie “The Gauntlet,” Clint Eastwood’s character tells Sondra Lock’s character the famous three-word line, “Nag, nag, nag.”
While most people don’t like being nagged, South Point Pointers’ senior offensive lineman Brody Thompson found the continued dialogue with the Bluffton University Beavers’ coaching staff.
That constant dialogue led Thompson to sign a letter-of-intent with Bluffton.
“I picked Bluffton because they never stopped recruiting me. They stayed strong with their recruiting” said Thompson. “They felt like a family. Their coaching staff was amazing. When I went there I really felt welcomed. I think I picked a good school.”
Other schools who were the strongest recruiting were Urbana, Alderson-Broaddus, West Virginia State and Brevard College in North Carolina.
The 6-foot-4 Thompson played last season at 330 pounds but has since trimmed his weight down to 295 which has led Bluffton to project him as a guard or possibly a tackle.
“I feel like I’m a whole different player. I wish I was like this back during the season. It would have been nice. I’m a lot faster, a lot quicker and a lot stronger. Everything has gotten better,” said Thompson.
With school facilities and public gyms closed due to the Coronavirus pandemic, Thompson said he’s still been able to maintain his training and lifting.
“I have a trainer in Ashland. He is a friend of my dad and he has a like a workout gym at his house. I go down there all the time. He really works me,” said Thompson.
“Sometimes I go down to Chesapeake High School’s field. It’s usually open. I have some sand bags and do workouts with sand bags and I do a lot of sprints. I’m in really good shape.”
Bluffton was 2-8 last season but Thompson said the record is misleading.
“They think I can come in and play right away. They think I can help. But it’s one of those things where they have a lot of young guys and they were a couple of possessions away from winning maybe six games,” said Thompson.
One thing that could help escalate Thompson’s playing time at Bluffton is teammate Brandon Pierson who also signed with Bluffton.
“I’m so excited about it. It’s going to help my transition a lot to college to have someone there I know and someone I’m really close to. I expect big things this next year,” said Thompson.
The Pointers’ lineman plans to take an aggressive approach to his first season at Bluffton.
“I want to make an impact my freshman year for sure. I want to go in there and really help them wherever they need it. I want to play my role and try to help out as soon as I get there,” said Thompson.
Extending his football career was something Thompson dreamed of doing since he began playing when he was just 5-years old.
He played some basketball until middle school before shifting his attention solely on football.
“I really wanted focus on one sport and try to be successful in one sport and put my mind on one sport. I knew football was the best route to go,” he said.
Thompson plans to get a degree in social work.

Marshall to do virtual ceremony in fountain memorial of plane crash