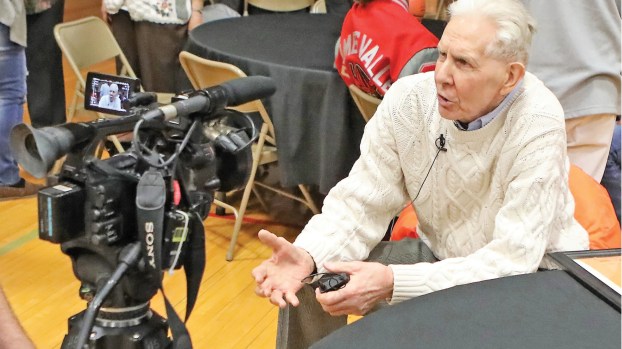 Bob Leith speaks at a 2019 event honoring the history of the Wateroo Wonders. (For The Ironton Tribune | Tim Gearhart)

GENERATIONS: A history of history

After four decades of teaching, Leith continues sharing his love of the past with the public

Bob Leith said he has 46 years of experience teaching history, between stints at Ironton High School, the University of Rio Grande and Ohio University Southern, where he retired from in July 2012.

Born in Ironton, he said his path to teaching the subject for which he is known is “a strange story.”

He went to Rio Grande for four years, where he played basketball. His mother had recently died and he said he “never saw his father.”
After his mother’s funeral, he said he told his team that he was going to quit to take care of his siblings.

But he said his coach intervened, telling him “go to school and we’ll take care of the, kids.”

He said they followed through, providing clothes, money and other necessities. He said he began taking history classes because, in order to go home, he traveled with a coach who was taking the same classes and it kept their schedules together.

“In order to come home, the only way was to walk or thumb,” he said.

Following his graduation from Rio Grande, he went to Union College in Barbourville, Kentucky, where he got his master’s degree. From there, he took his first teaching job at Rio Grande.

Over the years, Leith has become well known for his expertise on American history, penning 110 articles and doing 52 television programs.

Though he said when he began at OUS, he was teaching European history, having to put in to be approved to begin an American history course.

While at OUS, he partnered with fellow professor Steve Call and organized many history trips, taking students throughout the country to sites like Monticello, Boston, Jamestown, Vicksburg and Gettysburg.

He said he often gave a lecture at the statue of Confederate Gen. Robert E. Lee at Gettysburg, which is at the position from where Lee watched the decisive Civil War battle.

Leith said he would walk his students through Pickett’s Charge, having them go under fences and recreate the move toward Union lines.

He said, many times, at these sites, passersby would gather to listen.

“They thought I was somebody with the park service,” he said.

Leith says that Lee is the one person in history he would have liked to have met, having studied his life and been to his house and several battlefields.

He lists his other five figures of deep interest as Abraham Lincoln, Andrew Jackson, Larry Bird of the Boston Celtics and country musician Waylon Jennings.

Since retiring, Leith has kept busy, writing a monthly history column for The Ironton Tribune on a topic relevant to a key date.

He’s been involved with several other projects. One came about when he was recently contacted by the class ring company Jostens, who had heard of his lecture on the Waterloo Wonders, the famed basketball team from Lawrence County.

“They’re commissioning a Waterloo Wonders ring,” he said, and said he was asked for his input on its creation.

He said he has also been contacted to work on a documentary on Civil War bean dinners, which took place throughout southeast Ohio.

“After the war, they were done to honor soldiers,” he said of the events, many of which faded away with the passing of veterans.

Leith said he is working with the filmmakers to show them where they occurred.

He has served as master of ceremonies at the bean dinner at Rio Grande, which he said was set to have its 150th annual event this year, though he said those plans are up in the air because of the COVID-19 pandemic.

At the University of Rio Grande, he participates in the school’s athletic hall of fame, which he wrote the constitution for.

“There are very stringent requirements,” he said of the honor, which includes many from Ironton. “They vote and induct people and there is a plaque with a bust in the gym.”

He is also active with the COSA Boy Scout campground near Friendship, Ohio.

An organization was formed in 1994 to preserve the camp, which was created during the Great Depression, authorized by President Franklin Roosevelt as part of the Works Progress Administration.

An Eagle Scout, Leith said the work, which involves restoring the site’s cabins, was a thank you to the organization.

“It’s a way to give back to the scouts for what they did for me,” he said.

Lawrence County agencies continue to deal with the new normal

The Lawrence County Commissioners met on Tuesday via a Zoom meeting and got updates on situations around the county. Lawrence... read more