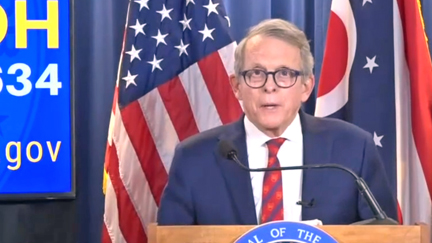 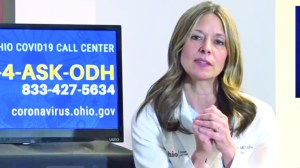 Ohio Department of Health Director Amy Acton speaks at a news conference on the coronavirus pandemic in Columbus on Monday. (Screengrab)

Hospitals set for May 1, retail on May 12

COLUMBUS — Ohio Gov. Mike DeWine outlined on Monday the timetable for the reopening of the state’s economy, following the peak of coronavirus cases.

The governor urged residents to exercise caution as the state enters the new phase in the pandemic.

“The coronavirus is still here,” he said. “It is just as dangerous as it’s ever been. It is still living among us. It is still in Ohio.”

The governor said the tools the state uses to curb its spread remain the same.

DeWine also stressed the importance of wearing face coverings when in public.

“These are things we need to continue to do,” he said. “But we can get Ohio back to work while we continue to protect our communities. This will get us mobbing in May.”

DeWine said the trend in the number of new cases was where they wanted to be and looked encouraging.

“But we haven’t had two weeks going down yet,” he said. “But we’re moving in the right direction.”

He said May would be a crucial month, with the state needing to ramp up testing and implement tracing to monitor contacts of infected people.

He said the goal is to triple testing by the end of May, getting to 27,000 a day, while hiring more workers to do tracing.

He said this would not include testing by private labs and the number would be even more “robust.”

“Testing and tracing go together,” he said. “Our state health department has been doing it for years. This is nothing new.”

He said it would be on a scale that has not been needed before and would require more volunteers and workers.

On the need to open the economy, Dewine said his “heart aches” for those not “able to work and seeing their savings go down every day.”

“We have got to get moving and get people back to work,” he said.

The governor said the most important question is “how” the opening is done.

“We can provide as much protection as we can — there is always a risk, but the how is very important,” he said.

DeWine laid out key dates for the next month, with the first being May 1, when hospitals are again allowed to do non-essential surgeries.

DeWine said the order limiting surgeries had been made in order to free up space and equipment for coronavirus cases.

He said the state is in a good place, as far as space is concerned, but there is still a need for more personal protective equipment.

May 4 is the date the governor announced for manufacturing, distribution and retail.
“That will be opened up,” he said.

General office environments are scheduled for May 4, while May 12 will see a reopening of consumer, retail and service businesses.

“We know there is a great desire to get restaurants fully open and to get hair salons and daycares open, but we must first start down the pathway of opening things up where we thought there was less risk and a more controllable risk,” DeWine said.

The governor said the state would be releasing details on requirements for businesses, such as limiting capacity to 50 percent of the fire code and for workers to wear facial coverings.

“The stay at home order will still be in place,” DeWine said. “Obviously, it will be modified. People who work can go to work. Anyone who wants to go to retail can go to retail.”

The governor said limits on gatherings will remain at 10 people for the foreseeable future.

“It’s a risk and I fully understand the risk,” he said. “It’s my decision and I take responsibility.”

He said there was no easy decision.

DeWine was asked about businesses such as gyms and hair salons. He said there was no clear answer on those dates and they would have to study more.

He said mass gatherings, such as concerts and ball games, will be among the last to reopen.

Dr. Amy Action, the director of the Ohio Department of Health, said she urged DeWine to weigh all aspects of the situation and go in a “slow, measured way.”

She said the entire world is learning as the pandemic runs its course and urged people to selective go about errands and limit interaction, even as restrictions are lifted.

She said the state has made great strides, working together in the first phase of the pandemic.

“I believe all of us in Ohio are going to do the next phase in the same spirit,” Acton said.

DeWine said the state would proceed slowly and continue to monitor data.

“As long as we don’t see anything alarming, we’ll be able to move down that pathway,” he said.

“The businesses allowed to reopen,’ we know they can meet the protocols,” Husted said. “And when you build confidence, you can do more.”

He said the more people do to lower numbers, the sooner other reopenings can occur.

“The more we do to stomp down the coronavirus, the sooner the next phase can happen.”

DeWine said the state still has “a ways to go.”

“These are the first steps,” he said. “I know there are other things we all want to do – get a haircut, go to restaurants – but we have to see how we are doing with COVID-19 first.”