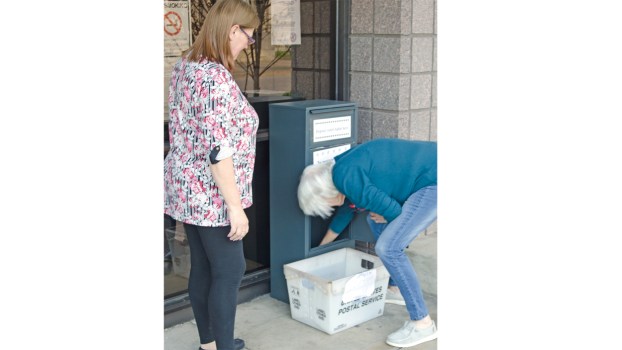 Board of Elections workers Karen Workman and Sharon Creger open the drop box at the Lawrence County Courthouse to remove the last of the ballots deposited at the Lawrence County Courthouse at 7:30 p.m. on Tuesday. Due to the coronavirus pandemic, the county, like the rest of Ohio, conducted a nearly all-mail election, with voters requesting absentee ballots, which had to be either postmarked by Monday or dropped in the courthouse box on Tuesday. (The Ironton Tribune | Heath Harrison)

It was a different kind of election night for officials

By any measure, Ohio’s primary election 2020 was different than every one before it.

The Lawrence County Courthouse was closed to the public, which meant no candidates waiting for results. And the voting was done by mail or drop box, so there were no poll workers rushing in with voting machines.

Just security officers and a few workers waiting for 7:30 p.m. so votes could be tabulated.

“This is definitely uncharted territory,” said J.T. Holt, a member Lawrence County Board of Elections. “We’ve never experienced anything like this.”

While there has been the occasional year when there were issues like getting results or having to wait for a court order or something, Holt said this was a unique election.

“There has been nothing remotely comparable at all,” he said.

In normal times, a primary election to pick the candidates who will run for the White House in the fall, there would be rallies by President Donald Trump on the Republican side and Democratic candidates, Vice President Joe Biden, Sen. Bernie Sanders and U.S. Rep. Tulsi Gabbard.

Then came the coronavirus pandemic, which changed everything.

Ohio banned mass gatherings of more than 10 people, which meant no rallies.

The primary was supposed to take place on March 17, but Gov. Mike DeWine announced that the election would be postponed due to a fear of spreading the virus among poll workers and voters.

A judge in Franklin County said that the governor didn’t have the authority to do that. Then Ohio Health director Dr. Amy Acton declared a health emergency and shut down the polling places across the state the day before voting was to take place.

“We had already made arrangements, we had voting equipment out,” Holt said. “So that was frustrating.”

It was decided that the primary election would consist of people voting by mail or dropping off their ballot in a secured box outside the local courthouse.

“We’ve never had mail-ins on this scale before. So it’s been a learning experience,” Holt said, adding he hopes the November election isn’t like the primary.