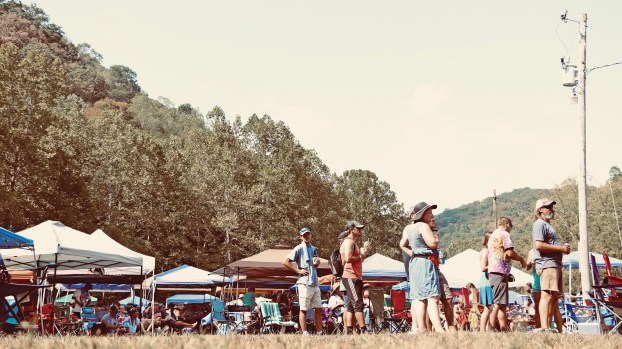 With the coronavirus pandemic going on, musicians are having a hard time since their livelihood is based on playing in front of crowds.

With that in mind, Dan Torigoe of Dolceola Recordings has put together a compilation album “Just Behind the Creek: Field Recording at Kickin’ It on the Creek 2019” to help out some affected musicians.

The sampler, available on BandCamp, features 17 songs by 17 bluegrass artists from Eastern Kentucky. All the tracks were recorded during last year’s festival, just behind the stage of the Kickin’ It on the Creek, thus the name of the album.

Dolceola Recordings owner Torigoe called The Ironton Tribune from Tokyo, Japan, where the record label is based. He said the label’s interest is in field recordings that document traditional American music, like blues, gospel and old-time music.

“I first heard about Kickin’ It on the Creek from a friend of mine during field recording of banjo master Jack Bunch in London, Kentucky,” Torigoe said, adding that the label doesn’t really have an interest in modern country music or younger artists. “But I felt it might be interesting and it could be an opportunity to do recording sessions. I was very interested in it, because it was showcasing modern mountain music with local artists.”

Kickin’ It on the Creek is a music festival held in Irvine, Kentucky for the past five years. The festival features all types of bluegrass and Appalachian music and featured 40 artists. Last year’s headliner was Tyler Childers, who is from Lawrence County, Kentucky.

“It actually perfectly fit our mission to document the current situation of community-based music in the United States,” Torigoe said. “Luckily, I got a press pass. I wasn’t acquainted with any of the musicians, so I didn’t know what was going to happen.”

He talked with the musicians and found out that some of them would like to be recorded. They set up a recording session at the house of the festival owner Byron Roberts and used their old reel-to-reel recorders to record 20 musicians.

“It went really well,” Torigoe said. “It was absolutely one of the best recording sessions we ever had. We really had a good time and everybody was so talented. They were really young, but so talented.

They had deep roots and our spirits were touched by that.”

Torigoe said he felt like he captured a moment with the young musicians.

“It is different than what we normally do,” he said. “But at the same time, I felt they are pulling from the same roots as the elder musicians.”

Originally, there was no plan to release the recordings until it became obvious that the musicians would not be able to tour for a while, leaving them in a tight spot.

“I wondered if there was anything we can do for them, and thought this is the only thing we could do,” Torigoe said. So, they talked with the with musicians and Roberts about the project late March and early April, and everybody loved this idea. “I feel like it is the time to give something back to these great musicians, and I would like to thank them for the great music and making this happen. They gave a lot to me and I feel it is a time to give something back to them.”

Tuesday’s results were not what the supporters of the Lawrence County Developmental Disabilities levy had hoped for. According to unofficial... read more