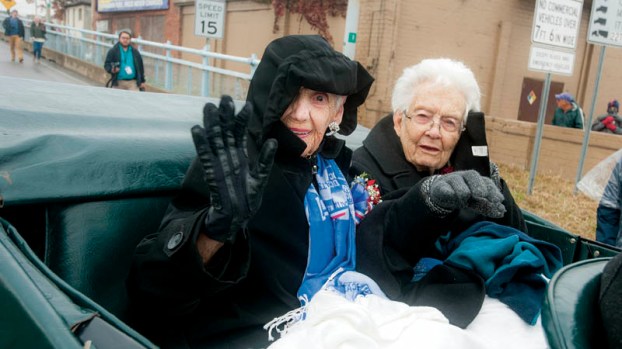 Della Burton, left, and Verna Mae Sloan, both 102, wave as they are the last to travel across the old Ironton-Russell Bridge in November 2016. 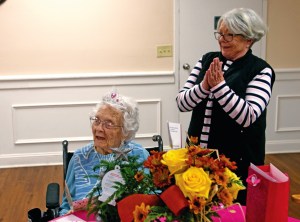 Verna “Bunn” Sloan and her daughter, Jo Ann Steinbeck, look on as family and friends sing ‘Happy Birthday’ at a celebration of Sloan’s 104th birthday in November 2019. (Submitted photo)

One of two women who were the last passengers across the old Ironton-Russell bridge and the first across the new Oakley C. Collins Memorial Bridge has died at age 104.

“She was a very pleasant lady,” Veronica Nunley, a nurse at the facility, said, and recalled her sense of humor. “And she loved to cut up.”

Both could remember the Ohio River before a bridge existed.

“I hate to see it go, but it’s due,” she said of the 94-year-old bridge, which closed to traffic that day and was demolished a few months later.

At her 104th birthday party, Sloan’s family told The Tribune she got her nickname when she born on the first day of rabbit season and her father ‘I don’t have to go rabbit hunting today, I have my own little bunny.”

She was retired from the registration department at Lawrence County General Hospital and volunteered many years with the hospital following her 1979 retirement, receiving recognition for 5,000 hours of service. She was a member of Church of Christ in Ironton and volunteered in their food pantry, and was a volunteer with the American Red Cross.

Sloan will be buried at Woodland Cemetery on Saturday. 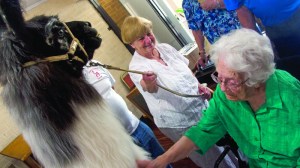 (The Tribune/Heath Harrison) Verna “Bunn” Sloan pets Angel from Good News Llamas during a visit to Harbor HealthCare of Ironton in 2018.