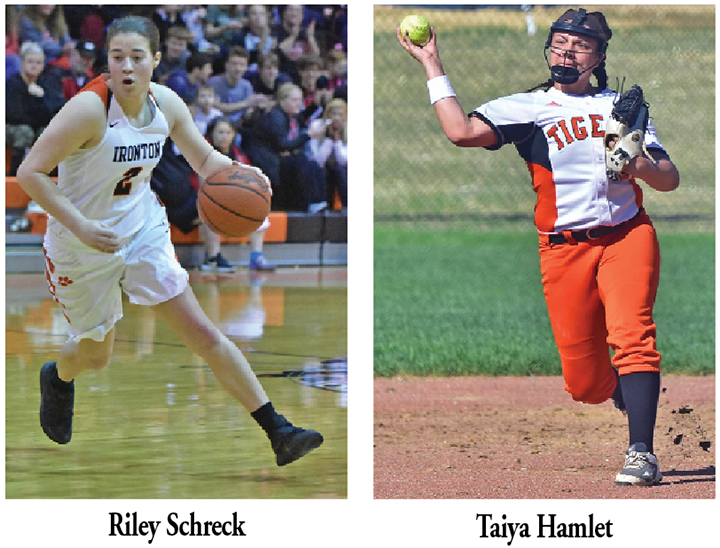 Riley Schreck is a versatile basketball player who is capable of switching from one position to another.
Schreck is putting that versatility to use now in a search for a college with a basketball program after becoming a player without a school when Urbana University decided to close the school last week.
The Ironton Lady Fighting Tigers multiple sports standout had to trash her letter-of-intent with the NCAA Division II Blue Knights and start a new search.
“I was shocked and it was really another nail in the coffin per se because the day before we learned there was going to be no softball team for schools the rest of the year so I was really back at square one,” said Schreck.
“It was tough because so many schools’ academic scholarships were gone because they filled them up with other kids. Right now, I feel like I’ve got a little more reassurance.”
The 5-foot-9 Schreck was a Division 3 third team Southeast Ohio All-District selection last year and first team All-Ohio Valley Conference.
Schreck averaged 10 points a game last season and is an outstanding 3-point shooter, hitting better than 35 percent of her long-rang attempts.
“I got recruited because I’m a shooter and because of how big I am and that I played different positions. And they liked me off the floor academically,” said Schreck who has a 4.6 grade point average as does her twin brother Nolan who played football and baseball.
The nightmare began on Tuesday, April 21, when Urbana women’s head coach Andrea McCloskey made that fateful phone call.
“My coach called me last Tuesday and she was pretty upset and I couldn’t tell why. I thought she just called to check up on me,” said Schreck.
But the call came after a Zoom Chat with the employees at Urbana that informed them the school was closing and they were all now unemployed. “She told me I’d have to find a new place.”
Scheck — who also plays volleyball and softball — said she has gotten a lot of calls, emails and texts from a lot of coaches, but she has narrowed her choice down to the University of Rio Grande and Alice Lloyd.
“The offers are for basketball. My former coach reached out to a lot of schools. I haven’t heard a lot of finances out of Rio yet. Alice Lloyd is only going to be about $2,500 a year so that’s probably my best option right now.”
The original postponement of spring sports was actually good news for Schreck who suffered a knee injury at the end of basketball season and was going to miss the first part of the softball season.
There was a brief positive period because the time off allowed Schreck to heal and she was looking forward to playing even a shortened season that would include a tournament.
The Ironton girls’ softball team reached the regional tournament last season for the first time in school history and returned all but one player.
The loss of the softball season and the closing of Urbana also affected Scheck’s classmate Taiya Hamlet who had signed to play softball for Urbana.
Now, Hamlet is scrambling for a landing spot as well.
Schreck plans to become a high school math teacher and coach.