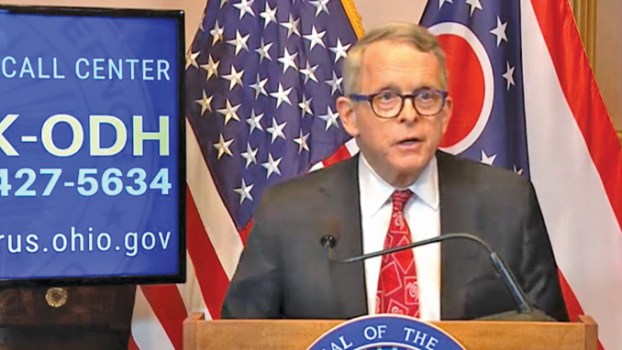 Ohio Gov. Mike DeWine speaks at a news conference on the coronavirus.

The measure is an effort to put retailers on par with restaurants and their ability to do carryout, and to address smaller businesses’s frustration that big box stores have been open throughout the pandemic, often selling the same products, from TVs to mattresses, said Roger Geiger, president of the National Federation of Independent Business Ohio chapter.

The goal of the order was “to get these small guys open because they are truly fighting for their survival,” Geiger said Friday.

Republican Gov. Mike DeWine had said all week that retail businesses could not reopen until May 12. DeWine planned to discuss the new order at his Friday press briefing, spokesman Dan Tierney said.

Consistent with DeWine’s earlier announcements, health care offices were allowed to reopen Friday, followed by construction companies, distributors, manufacturers and offices on Monday, May 4. Bars and movie theaters remain closed, along with in-person dining at restaurants. Sporting events and concerts are still prohibited.

Friday’s order extends the state shutdown until May 29, except for the exceptions already outlined.

Masks are mandatory for employees returning to reopened businesses and strongly recommended for customers and clients under the Ohio order. Businesses have the authority to require customers to wear masks, and some — like Costco — have already done so.

Geiger’s clothing and sporting goods stores in the Cleveland area will stick with their plans to open May 12, mainly so that they can have their staff ready, said Chas Geiger, a co-owner, and no relation to Roger Geiger.

All employees will be wearing masks, he said, and they’ll strongly encourage customers to do so as well.

“A lot of what we’re thinking about is the confidence of our customers to come back,” he said.

Republican state Rep. Nino Vitale, who’s among the more than 30 GOP lawmakers calling for all businesses to reopen right away, blasted the latest order issued by health director.

“Now when you go to bed at night, you have NO IDEA what your rights will be when you get up in the morning,” he wrote on his Facebook page Friday.

In other coronavirus-related developments in Ohio:

CASES
The state has 975 presumptive or confirmed virus-related deaths, and more than 18,000 cases, including more than 3,500 hospitalizations, the state health department reported Thursday.

For most people, the virus causes mild or moderate symptoms that clear up in a couple of weeks. Older adults and people with existing health problems are at higher risk of more severe illness, including pneumonia, or death.

CARE
Kroger opened its first Columbus drive-thru site for coronavirus testing on Thursday, with capacity for 330 tests a day, and planned to open another in Cincinnati on Friday. The company previously added Ohio sites in Toledo, Bowling Green and suburban Dayton, along with Detroit and Denver.

PRISONS
Two prison employees and 28 Ohio prison inmates have died from COVID-19, according to the Department of Rehabilitation and Correction.
Nearly 4,000 inmates have tested positive, but the prisons agency has only conducted universal testing at three facilities to date, meaning the actual number of positive cases is unknown.

Seewer in Toledo reported from Toledo. Julie Carr Smyth in Columbus contributed to this report.

In response to the COVID-19 pandemic, the Lawrence County Department of Job and Family Services will make available assistance to... read more