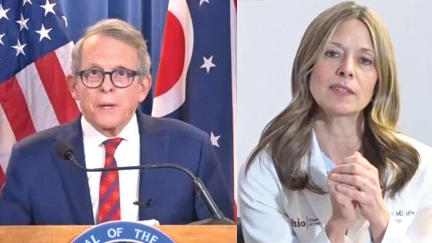 Governor says he is “fair game,” but denounces ‘disrespect” to media, officials

COLUMBUS — Ohio Gov. Mike DeWine has taken issue with the actions of some of the shutdown protesters in recent days, including demonstrations that took place in a residential neighborhood near the home of Ohio Department of Health director Amy Acton.

“I respect the First Amendment,” DeWine said at his news conference on Monday on the coronavirus pandemic. “I am fair game.”

DeWine also took issue of a video in which a protester refused to give space to a reporter or follow social distancing while arguing with a Columbus television reporter.

“But, it is not fair game to be disrespectful or obnoxious to the news media,” he said. “To treat them with disrespect and to not practice social distancing with them, I find that very sad.”

On Saturday, media outlets reported that a group of 10-20 protesters, opposed to the shutdowns related to the pandemic, had staged a demonstration on the sidewalk in Acton’s neighborhood, protesting the shutdown.

“I’m the elected official who ran for office,” DeWine said. “I’m the one who makes policy decisions. Members of my cabinet work hard, but I set the policy. When you don’t like the policy, again, you can demonstrate against me. That’s fair game.”

DeWine said he has been the subject of many protests in his four decades in government, but he said the protesters should not have gone to Acton’s neighborhood.

“But to bother the family of Dr. Acton, that’s not fair game,” he said. “It’s not right. It’s not necessary. The buck stops here. I’m the responsible person.”

$50 in coupons available for eligible seniors During the Summer of 2019, the Ohio Department of Aging announced that part... read more