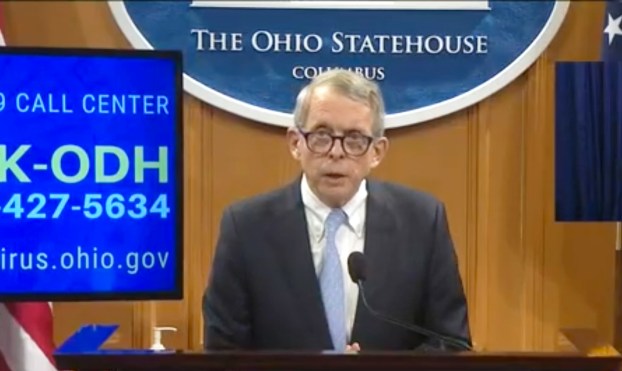 COLUMBUS — Ohio Gov. Mike DeWine laid out more dates for the reopening of Ohio’s business at his news conference on the coronavirus on Thursday.

DeWine said hair salons, nail salons and day spas will be permitted to reopen on May 15.

Restaurants will open in two phases, with outside dining permitted on May 15 and inside dining on May 21.

“For the last week or so, we’ve talked about how we need to do two things at once: bring back the economy and stay safe,” DeWine said. “We are Ohioans. We can do it. How we open up is so very, very important. The how is an essential part of how successful we’re going to be.”

These dates will follow other segments of the economy that have been previously announced.

Next week, the governor said “virtually all retail will reopen” on Tuesday.
“At that point, 80 percent of our economy will be reopened in the state of Ohio,” DeWine said.

DeWine said his administration had formed working groups with representatives of the industries affected, as well as health professionals to create guideline for businesses to follow.

“What we’re trying to do is marry the science and practices of these businesses,” DeWine said. “Each business is different.”

For restaurants and bars, distancing between parties, as well as physical barriers, must be used, while open congregate areas, such as dance floors, must remain closed.

Treva Weaver, a restaurant owner, who served on the group, said businesses could use these congregate space to put up tables and make more distancing possible.

Debbie Penzone, chief operating officer of Penzone salons, spoke on some of the guidelines for salons.

“We all do the same services,” Penzone said. “The focus was how to deliver that personal service in the safest manner and how to be inclusive of every business.”

She said customers should wait in their cars until ready for an appointment, and only the person with an appointment should enter.

“Unless it’s a child with their parent,” she said.

Penzone said professional will be donning masks, while things, such as magazines or self-serve beverages would not be available.

DeWine said the return to normalcy will be an extended timetable and Ohioans needed to think of the situation in the long term as the virus remained.

“This is a marathon,” he said. “This is not a spring. Were in this for the long haul.”

DeWine acknowledged infections will go higher with more social interactions, but the challenge is to keep those numbers as low as possible while restarting the economy.

DeWine said the state is now at a point where there is a 1-1 ratio, where, for each person with the virus, one other is infected.

He said the state must increase testing, which he said will be in place, as well as do contact tracing for those infected.

“We’re seeking it out,” he said. “We’re containing it. We’re isolating it.”

He said the most important thing is for people to be mindful of their own behavior and to keep up distancing.

“We’re entering a phase where it is not so much what I, the lieutenant governor or Dr. Acton says,” he said. “This is going to determine whether we can do this or not.”

He said people need to continue to exercise caution by doing things such as wearing facemasks.

“This is a gamble,” he said. “This a new part of the journey. We’re on a road that has never been traveled before. It is a road that has danger signs on it and we need to understand that. The danger is that we relax and pull back. If we relax and pull back, and take things for granted in a month or six weeks from now, things are not going to go the way we want them to go. We don’t want to see a spike.”

The governor said the risk is still there, especially for the elderly.

“Wear the mask for others,” he said “Be careful you’re not bringing this back to your 88-year-old grandmother. Things look good outside today, but the virus is still out there.”

DeWine said following the precautions would help to get the state out of the situation, both economically and from a health standpoint.

“This too shall pass,” he said. “This is not forever.”