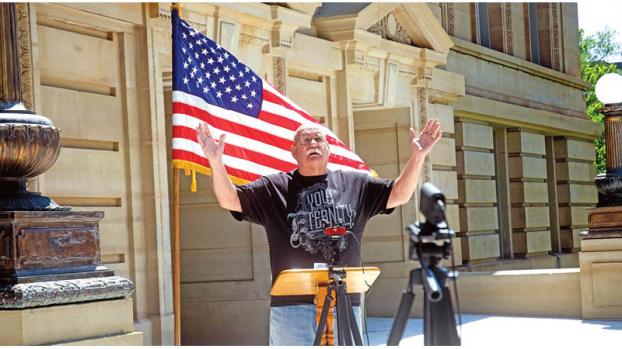 For the past five decades, members of the Ashland Area Ministerial Association have gathered on the steps of the Lawrence County Courthouse on the first Thursday in May for the National Day of Prayer to pray for the country and the many aspects of it.

And despite the coronavirus pandemic and social distancing orders, ministers gathered on Thursday to pray. They just held the event without a big crowd, opting to send their message out on Facebook.

First Church of the Nazarene pastor Rob Hale said now, more than ever it is important to continue the National Day of Prayer.

“Historically, the great prayers of presidents, like George Washington and Abraham Lincoln, has always been in a time of crisis,” he said. “America and the world is in a time of crisis right now. And as a pastor, a father, a husband, my heart breaks for what we are going through. And we definitely need wisdom and guidance and we need God’s hand upon our president, upon our governor, upon our politicians that are making these difficult decisions.”

As the event went live on Facebook at the stroke of noon, Hale explained that it was the first time they had ever broadcast the event.

“We are again standing in front of the courthouse, the 111-year-old Lawrence County Courthouse,” he explained. “And it was just remodeled recently.”

He remarked that it was the first event to be on the steps since the courthouse was closed to the public around the same time the steps were finished in March.

He explained that the first National Day of Prayer was July 4, 1952 and was signed into law by President Harry S. Truman. And that a young evangelist named Billy Graham was a big part of the push to make it a national event.

The pledge of allegiance was led by Ohio Fourth District Court of Appeals Judge Jason Smith.

The first pastor to pray was Kevin Carter, of Impact Church, who prayed for the nation’s churches.

“We pray that our lives will be true and faithful in testimony of your goodness,” he said. “That we would live for your glory.”

Pastor Darrell Ford, of the Trinity Assembly of God, prayed for the local, state and federal government leaders.

“Lord, we pray that your glory would break out like the dawn throughout the government,” he said. “We pray that America would bless you with our leaders and our laws and with our lives. We pray that you will guide them in your ways so that our nation, the United States of America, will give you glory.”

Former Ironton Mayor Katrina Keith, a minister with the Church of the King, prayed for the family.

“Heavenly Father, we pray that you will extend your glory through our families as we dwell in you,” she said. “We pray that you strengthen marriages so that husbands and wives will remain faithful to you and to one another. We pray that parents will love and nurture their children.”

Jeff Cremeans, the pastor of the Ironton City Mission, prayed for the education system.

Butch Deere, pastor of the Church of the King, prayed for businesses.

“Father, we believe you are raising up a standard in the business world in America and around the world and that you are going to bless this nation even more than it was blessed before,” he prayed. “We thank you for America’s blessing and prosperity throughout the history of this nation.”

Rev. Stanley McDonald, pastor of New Hope Baptist of Ashland, Kentucky, and a senior master sergeant who retired from the U.S. Air Force after 26 years of service, prayed for the armed forces.

“We pray you will fill our military with glory. We pray that you would lead our military, that they will defend freedom and liberty. We ask for your protection as they battle evil and defend the weak,” he prayed.

Terry Jones, pastor of Resurrection Hope UMC, prayed for the media and the entertainment industry. He asked those assembled there to raise their hands rather than bow their heads.

“We ask that you would bless everyone here and the media,” he said, including social media, newspapers, television stations and movie studios. “We ask that everything they do is guided by you and those that don’t know you as their Lord and savior, that this would be the day they come to know Jesus Christ is the savior of the universe.”

And for the first time in the event’s history, they had a guest speaker, Tim Throckmorton, who serves as the Midwest Director of Ministry for the Family Research Council in Washington, D.C. His column runs regularly in The Ironton Tribune and it is published nationally in Our Daily Bread and the Washington Times. He is the president of Lifepointe Ministries and serves on various ministry and civic boards.

“We asked the governor of Ohio to come, but for some reason he was unable to,” Hale joked, adding he reached out to Throckmorton to speak.

Throckmorton began with how those that came to be America’s founding fathers were given strength to lead the American Revolution through the power of prayer.

“They called for a day of prayer and fasting,” he said, adding after that, they called the leaders of the colonies to Virginia to meet in September, 1774. After a reading of Psalms, they began the discussion of the colonies becoming a nation independent of England.

“Being a people of prayer is who we are as a nation,” he said. “We are one nation under God. As we come together on this National Day of Prayer, may we come to God and trust him like never before.”

The event ended with the pastors singing, at a social distance, of “God Bless America.”

Articles about Ironton in a national magazine are a rare thing. But in this month’s World War One Illustrated there... read more