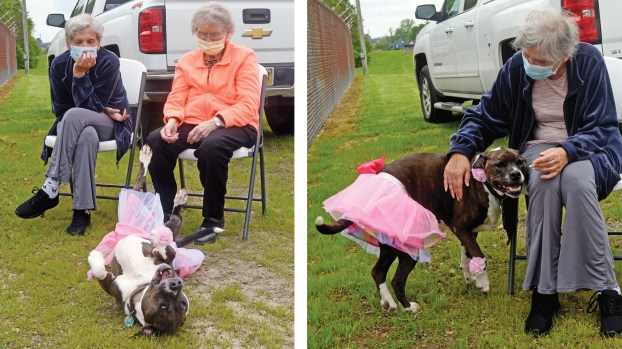 Lexi tries to lick owner Sandra Fortner’s face after the two were reunited on May 14. Lexi boarded at the Lawrence County Animal Shelter while Fortner was in the hospital for three months. (The Ironton Tribune | Mark Shaffer)

For the past few weeks, Lexi has spent her days at the Lawrence County Animal Shelter, not as an abandoned dog, but as more of a guest.

She was there because her owner, Sandra Fortner, of Ironton, went into the hospital on Feb. 7. Her brother, Mark Breeding, was at his wit’s end since he couldn’t take care of the dog.

He contacted the shelter’s director, Denise Paulus, who he knew from church, and asked if they could watch 10-year-old Lexi. Paulus agreed.

“We looked at it as more of a foster situation,” she said. “We just kind of made her the shelter dog.”

While Lexi was there during the days at the shelter, she became a “boss,” doing things like taking a kitten off a table so it wouldn’t get hurt and checking out visitors as they came into the building.

“Most of our dogs come and go,” Paulus said. “So, this was a good experience for the shelter to have a shelter dog. She got spoiled.”

Shelter intake specialist Mary Brady would take Lexi home at night and went for walks with her kids.

“They love her, she’s been a lot of fun,” she said. “I wanted to make Sandra smile. I knew she would love it. The dog did not love it.”

Brady dressed Lexi up in a kid’s tutu, bows and painted nails for her reunion with Fortner.

Around 1:30 p.m., Lexi was watching as a white car pulled up and her owner got out. Once the dog realized it was Fortner and her family, Lexi ran to her and licked her and rolled around on the ground in happiness.

“I’m tickled to death to have her back,” Fortner said. “I’ve missed her bad. We always slept together. She was my husband’s dog and after he passed, she took up with me.”

Fortner had been hospitalized with severe respiratory issues and at one point was in a coma and life support.

Breeding said Fortner nearly died and at one point, was nearly taken off life support but she recovered. She was on a ventilator and had to go through kidney dialysis.

“I was really sick, but God brought me through it,” Fortner said. “They wanted to pull the plug, but everyone started praying and God pulled me back.”

When she was conscious again, she immediately asked about Lexi.

Breeding said the shelter sent pictures of the dog and even took her to see Fortner while she was recovering at a convalescent home after she got out of the hospital.

“I can’t give enough praise to Denise and Mary for what they’ve done,” he said. “I don’t know what I would have done. My mom is 95, she couldn’t take care of Lexi. So, it was just a blessing.”

This week, members of the Lawrence County Fair Board will meet to address the format of this year’s fair. Although... read more