Let There Be Light! Reds brought night baseball to major leagues 85 years ago 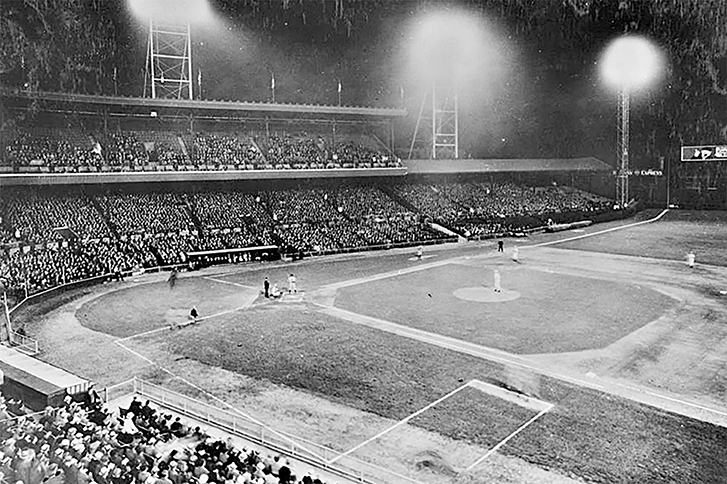 The Cincinnati Reds hosted the first night game in Major League Baseball history 85 years ago on May 24, 1935. The Reds beat the Philadelphia Phillies 2-1 at Crosley Field.

The Cincinnati Reds were the first professional baseball team, so it seemed only fitting the franchise got to host the first night game.
Baseball didn’t just select the Reds to host the game. The idea came from general manager Larry MacPhail who took over the nearly bankrupt Reds in 1933 and came up with the idea he got from watching some night games in Columbus.
With support from radio magnate and Reds’ owner Powell Crosley Jr., it was MacPhail who almost single-handedly got Commissioner Kenesaw “Mountain” Landis to give the team permission because the other owners were afraid there was not enough light to play.
The game had been scheduled for May 23rd but rain pushed the game back to a Friday. The threat of rain and cooler temperature had attendance at around 20,000 which was about 10,000 less than stadium capacity.
At 8:30 p.m. in Washington D.C., President Franklin D. Roosevelt pressed a gold telegraph key in the White House approximately 500 miles away that sent an electric signal lamp to a table near first base where MacPhail was standing and he flipped the switch on the 632 Mazda lamps that lit up the stadium.
The Reds beat the Philadelphia Phillies 2-1 at Paul Derringer outdueled the Phillies Joe Bowman. Derringer – who allowed six hits and no walks — said the game was one of his biggest career highlights.
In the pre-expansion era and before interleague play, there were only eight team in each the National and American Leagues and the original plan was for the Reds to play seven night games, one against each National League team.
The actual first night game ever played with lights came in 1880, the year after Thomas Edison invented the light bulb. It was an experimental game between two department store teams.
There were a few exhibition night baseball games in the early 1900s. One game was in 1909 and another in 1927, but the games did not count in the standings.
The first official minor league game under the lights was played on April 28, 1930, in Independence, Kansas.
The first big-league teams to play at night were the 1930 Kansas City Monarchs of the Negro Leagues who often played against the House of David, a team that carried portable lights mounted on trucks as well as the team bus.
The Monarchs first night game was on April 28, 1930, in an exhibition game against Phillips University.
The Reds were also part of another first in Major League Baseball.
Televised baseball didn’t begin until August 26, 1939 when W2XBS — later to become WNBC-TV — aired an afternoon game between the Reds and Dodgers at Ebbets Field in Brooklyn.
There were only about 400 people who owned a TV and regular broadcasting of games didn’t hit the networks until 1946.
The Reds won the first game 5-2 but dropped the nightcap 6-1.

NFHS director: Handshakes may be on hold, not sportsmanship

INDIANAPOLIS, IN — The “new normal” is one of the many terms we hear repeatedly as the country begins its... read more