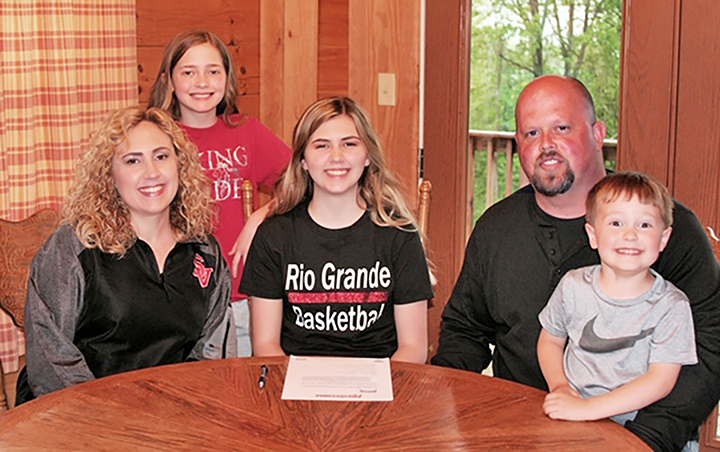 WILLOW WOOD — Not even a back-breaking experience — literally — could keep Taylor Sells from playing the sport she loved.
That love along with her determination and work ethic kept Symmes Valley Lady Vikings senior on the basketball court. And now, after signing a letter-of-intent with the University of Rio Grande RedStorm, Sells will continue to play the sport she loves.
What could have been a career-ending crash turned out to be only a speed bump as Sells fought through an injury to keep playing.
“My sophomore year I had a lower back injury and I ended up breaking my back in the lower part of it,” said Sells. “My AAU coach (Josh Ward) pushed me through it because I didn’t think I would be able to play after that.”
Sells began playing organized basketball in the second grade but she has been around the game thanks to history of her family’s involvement in the sport.
“My aunt was a 1,000-point scorer at Symmes Valley, my dad (Ryan) has coached for 20 years, my papaw was a coach before that, my brother played before I got on the floor. I’ve just always been around it,” said Sells.
Her aunt Erin Sells was a standout for the Lady Vikings and her mother the former Angie Pack.
As a sophomore Sells began taking her sister, Evan, to basketball camps and this camp was at Rio Grande. Sells was shooting around before the camp started and RedStorm head coach Dave Smalley took notice.
“Coach Smalley brought me a recruitment questionnaire and said ‘I’d like for you to fill this out. I like the way that you shoot.’ I was not really thinking much of it. It was just like maybe. And then the last time I visited and really got to talk to (Smalley) I was like, ‘I think I can do this,’” said Sells.
That talk with Smalley may have been instrumental in her college choice. Sells looked at some other schools but felt Rio Grande was not only the best fit but offered her the best opportunity to keep playing basketball.
“There was a school in Pennsylvania I really liked, but we decided it was too far so I told (the coach) before he offered me that as much as I liked looking at his campus online and what they had that it was too far and I wanted to stay close to home,” said Sells.
“I visited Rio two or three times before I made my decision. I was stuck between there and Shawnee (State). But I got to play basketball at Rio so that’s mostly why I chose it because I got to continue doing something I loved.”
The versatile 5-foot-9 Sells played every position on the court for the Lady Vikings except point guard. She was a second team All-Southern Ohio Conference selection and honorable mention on the Southeast Ohio Division 4 all-district team.
Sells isn’t sure what position she will play for Rio Grande.
“I would assume a 3 or 4 because of my height. I work really well underneath the basket but this year during the regular season I was a shooting guard because we really didn’t have anyone who could do it. We had to have Rachael (Hayes) at point guard,” said Sells.
Until this past season, Sells said she had never played on a team with a losing record including AAU.
“We had a rough year. I hope to change that at Rio. Up until now, I’ve never had a losing season,” she said.
Sells not only played basketball, but she attended some college classes at Ohio University Southern and took a course to become an Ohio High School Athletic Association basketball official.
Although she loves playing basketball, her main goal lies in academics.
“I just want to excel in the classroom. That’s my main goal because I want to go to med school afterwards,” said Sells.
Sells plans to major in biology with a pre-med track.

Let There Be Light! Reds brought night baseball to major leagues 85 years ago

The Cincinnati Reds hosted the first night game in Major League Baseball history 85 years ago on May 24, 1935.... read more