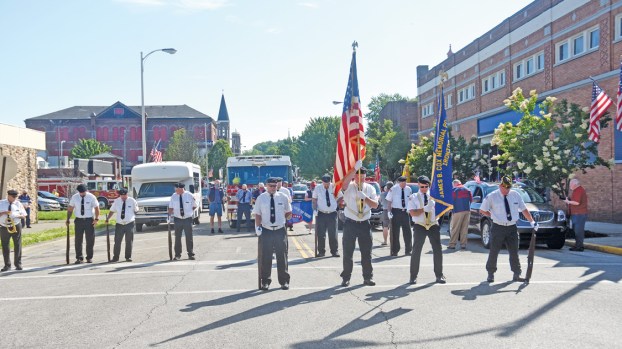 Members of the honor guard from VFW Post 8850 listen an opening prayer before the start of the 152nd Ironton-Lawrence County Memorial Day Parade on Monday. (The Ironton Tribune | Mark Shaffer)

It was a parade unlike any other.

State-issued limits on mass gatherings kept spectators away from the event, but organizers were able to continue a century-and-a-half tradition of honoring those who served.

Most participants were in vehicles, while many of those on foot were clad in protective face masks.

Organizers said there were three goals this year — to honor those who served, to keep the continuity of the event as the longest running in the nation and to maintain a safe environment for participants and the city.

Brent Pyles, chair of the trustees of the parade committee, said they were pleased with how the event turned out under the circumstances.

“Everyone listened to our pleading and stayed at home and watched online,” he said.

He said there were no incidents of anyone trying to enter the parade area against the orders on crowd limits that he knew of.

Altogether, the event took about 20 minutes to pass through town, with attendance limited to media and a few residents and business people from the immediate area.

The event usually draws more than 30,000 to downtown Ironton, but this year, people were asked to stay home and watch the procession on various media outlets, including The Ironton Tribune, which streamed the event live on its Facebook page.

Pyles said, to his knowledge, the parade has never had to scale down to this extent.

He said in the early years of World War II it was smaller, but not on this level.

“And that was because of resources,” he said.

Pyles thanked all police and fire departments, who helped to maintain the enclosed route for the parade.

He said Mayor Sam Cramblit II had also expressed satisfaction for how smoothly the event was pulled off.

While the crowd may not have been present, the parade had an audience. Several media outlets livestreamed the event.

As of late Tuesday morning, more than 15,000 people had watched The Ironton Tribune’s video.

Consisting of only one division this year, the parade was led by members of VFW Post 8850 of Ironton.

This year’s parade also kicked off with a special flyover of vintage aircraft by Bill Nenni, of Ironton, and other local aviators. The flyover featured two Boeing Stearman Model 75s, piloted by Nenni and Carl Bailey; a North American AT-6 Texan flown by Brad McGinnis; and a Beechcraft T-34 Mentor, flown by Tim Mullins.

“We heard from a lot of people around town who enjoyed that,” Pyles said.

This year’s grand marshal was James Rowe, while Lou Pyles was parade commander and Sally Inglis was named as honorary grand marshal.

— The video recording of the parade can be played on The Ironton Tribune’s Facebook page.

Plans in place for surge in COVID-19 cases