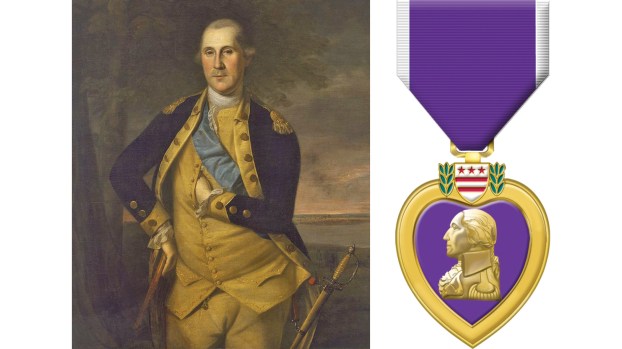 Gen. George Washington, commander of the Continental Army during the American Revolution, introduced the “Badge of Military Merit” to honor soldiers who had “given of his blood in the defense of his homeland and shall forever be revered by his fellow countrymen.” (Public domain)

History Lesson: The Origins of the Purple Heart

After the surrender of Charles Lord Cornwallis at Yorktown, Virginia on Oct. 19, 1781, many people felt the Revolutionary War would soon be over.

Washington feared that the Articles of Confederation Congress might fall into a state of relaxation after the victory at Yorktown. He returned to his troops at Newburgh, New York on March 31, 1782.

A ceasefire would not occur until Washington implemented it on April 19, 1783 — eight years to the day since the Revolutionary War had begun in 1775.

Washington had another war to fight as spring came in 1783 — how to reward his soldiers who had stayed the course since 1775.

Early in January 1783, some army officers informed the Articles Congress of the army’s discontent. Some of the Continental Army had not been paid for more than six years. There were unsettled food and clothing accounts. The Congress had failed to make provisions for the soldiers’ lifetime pensions promised them in 1780.

Washington thought these anti-Congressional meetings could lead to widespread mutiny, so he called a meeting of the officers for March 15. Some felt he would endorse their grievances.

When Washington addressed the officers, he condemned both “Newburgh Addresses” and told the officers that the Congress would treat the Revolutionary soldiers justly.

Washington began to read a letter from a Virginia Congressman. The writing was dim and Washington drew a pair of glasses from his pocket. The officers had never known the General’s eyesight was failing.

Washington said, “Gentlemen, you will permit me to put on my spectacles, for I have not only grown gray, but almost blind, in the service of my country.” His audience was overcome with emotion and many shed tears for their beloved general.

The officers agreed to let Washington try to solve their problems with Congress. Military despotism or dictatorship was avoided at Newburgh by the only man who could have stopped it!

Washington did not want to see his army disbanded in a ragged, shoeless and penniless condition. On Aug. 7, 1782, the year before the “Newburgh Addresses,” he had established two awards for his enlisted men. In doing so, this was the first time that any army in the world might receive such awards.

His first award was called the “Honorary Badge of Distinction” and was a white cloth sewn above the left cuff of their regimental coats, one strip for each three years of honorable service. These strips today are called “hash marks.”

The second award was called the “Badge of Military Merit” and would be more coveted by his soldiers. Washington was not only disturbed by the lack of compensation for his men, but also their state of patriotism and morale.

His second award could be given only for “instances of unusual gallantry… extraordinary fidelity and faithful service.” This award would be “the figure of a heart in purple cloth, or silk, edged with narrow lace or binding” to be worn on a soldier’s left breast.

When a soldier was awarded this “Badge of Military Merit,” his name would be recorded in the Army’s special Book of Merit and Washington would personally present the awards to those selected.

Those who received this “purple heart award,” regardless of rank, would receive salutes as if they were officers. An awards board would nominate soldiers for this award, but, in April 1783, no names had been submitted. A new board submitted names and Washington presented the nation’s first “purple heart awards” at Newburgh on May 3, 1783.

Three soldiers were selected to receive the “Badge of Military Merit.” Sgt. Elijah Churchill led two daring attacks into British lines and Sgt. William Brown led a party to attack Redoubt No. 10 at Yorktown with unloaded muskets, using bayonets only. Sgt. Daniel Bissell Jr. was one of Washington’s most successful spies and joined traitor Benedict Arnold’s Loyalist Corps in 1781 to get information.

In 1922, Capt. William L. Willey found part of a greatcoat from Washington’s Continental Army in an old barn in Deerfield, New Hampshire. It was moth-eaten and saturated with dust and cobwebs after nearly 140 years.

On the left breast of the coat was a heart-shaped badge of what looked to be steel-gray silk. It was declared to be the Revolutionary War “Badge of Military Merit.” What was left of the coat is on display in a museum in Washington D.C. The Continental Army’s Book of Merit has never been found. Only the above-mentioned Connecticut Sergeants are known for certain to have been awarded the Purple Heart for Revolutionary War service. Who was the man whose coat was found in Deerfield, New Hampshire?

After the Revolutionary War (1775-1783), the “Badge of Military Merit” was not awarded. This award was “revived” on the anniversary of Washington’s birth, Feb. 22, 1932. Today George Washington’s award is called the “Purple Heart Medal.” Upon its revival, the award was first given to Brig. Gen. Douglas MacArthur.

Now known as the “Purple Heart,” it is given to men and women in uniform who have been injured or killed in combat or captivity. Although we may never know who wore the “Deerfield greatcoat,” we do know that the total number of Purple Heart recipients is around 2 million today.

Washington proudly stated: “He who wears the Purple Heart has given of his blood in the defense of his homeland and shall forever be revered by his fellow countrymen.”

By Bob Leith for The Tribune

Restrictions highlight what we take for granted

What The Bogota Post got right about America before COVID-19 rings just as true during the pandemic – maybe even... read more