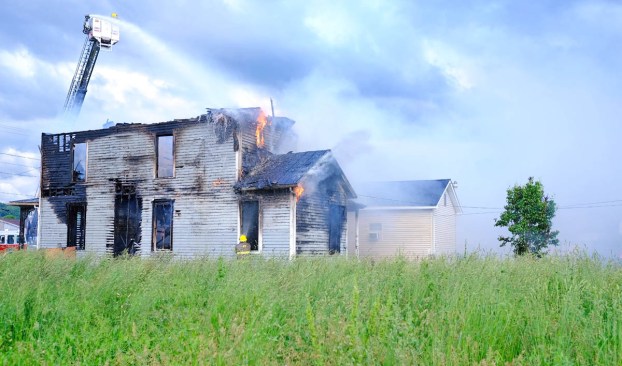 The Ironton Fire Department Fire Department battled a blaze at an unoccupied house at Second and Pine streets early Friday evening. The cause of the fire is unknown, but the fire department suspects that it was set either accidentally or intentionally.

The fire department started receiving multiple phone calls about the fire around 6:30 p.m. The house had been boarded up by the family, who said that they have had trouble with squatters and thought that may have had something to do with the fire.

There were around 10 firefighters on the scene, along with a pair of EMS units and two officers from the Ironton Police Department.

The blaze from the house was so high that flames were shooting out of the roof and the fire department had to bring in its tower bucket truck with two water hoses.

“Our main concern was the house next door, because of the very close proximity, about six feet,” IFD Chief Mike Malmeister. “With the short man crew tonight, it was tough to get it under control, but we called guys in and once they were able to get the tower up to put copious amounts of water on the fire.”

Malmeister said they don’t know the cause of the fire yet, but since there no electricity or utility service to the house, they suspect the fire was either intentionally or accidentally set.

“But whatever the cause, we know it shouldn’t have happened because nobody should have been in there,” Malmeister said.

Seniors across Lawrence County were set to take part in the traditional end-of-year activities, like prom and spring sports, and... read more