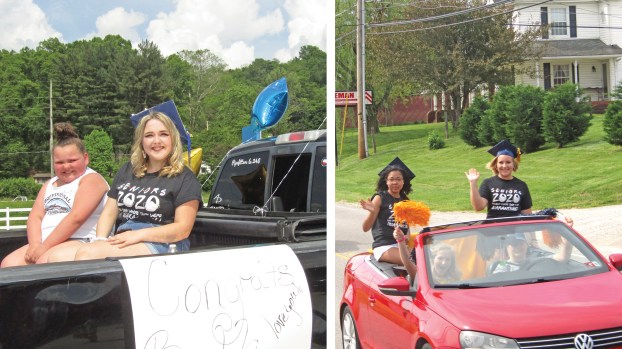 SOUTH POINT — Graduates of 2020 from South Point High School drove through the streets of the village to celebrate their accomplishments.

On Sunday, May 24, a parade of graduates — full of smiles and cheerful waves of last goodbyes one last time, were led by fire engines, state and local police, through South Point, with signs showing love for seniors and decorations that consisted of balloons and streamers placed on their vehicles. 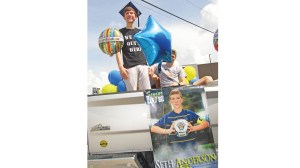 Seth Anderson, a senior at South Point High School, rides in a parade through the village to honor graduates on Sunday. (Austin Johnson | For The Ironton Tribune)

The graduates were applauded and welcomed by parents, friends and faculty of South Point Local Schools as they made their way through town.

Kent Stewart, a teacher from South Point High School, was among faculty members spectating the parade. Stewart was torn over school closing.

“We never really got to say good-bye and good luck,” he said, but was happy with this farewell. “It was great to see this class get a final send-off from the community, wouldn’t have missed it for anything.” 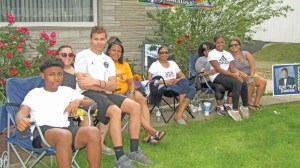 Family and friends of E.J. Daniels watch a parade through South Point honoring graduating seniors on Sunday. (Austin Johnson | For The Ironton Tribune)

The best moment of senior year for graduate Keonna Kennedy, 18, was “attending the student section and cheering on the football team, no matter what the score was.”

“That had to be the best time of my senior year… I absolutely love going to the games and cheering them on,” she said.

Kensey Kearns, 18, another senior of South Point, said she plans to attend Marshall University to major in dietetics, with hopeful thoughts to become an RD.

Kearns’s final message for her class stated, “I made the best memories with you all and even though it ended in a way we didn’t picture, I still wouldn’t trade my class for anything.”

The village council of Chesapeake and South will host their regular monthly meetings for June next week. In Chesapeake, the... read more