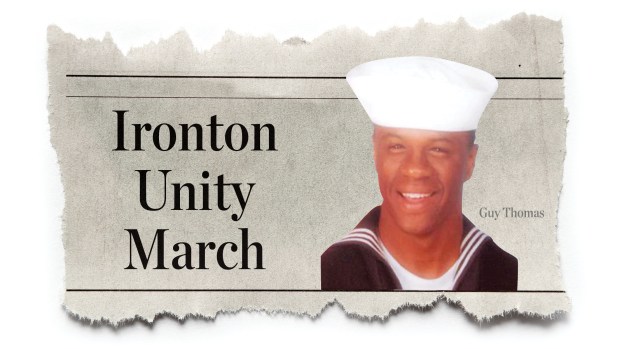 On Monday, there will be a unity march in Ironton to memorialize George Floyd and Ironton resident, Guy Thomas.

The Ironton Unity March is being put on by the City of Ironton, Young Brilliantaires and the Ironton Police Department.

Participants in the march will gather starting at 5:30 p.m. at the Rotary Fountain at Center and Third streets in downtown Ironton. The march will start at 6 p.m. and will head toward the floodwall and then to the boat landing area by the Ohio River.

There will be several speeches and the details of who will speak is being finalized.

After the speeches, a memorial wreath will be put in the river in honor of Thomas, who was a U.S. Navy veteran.

On March 8, 2008, the body of 45-year-old Thomas was found in the parking lot of the Ironton Police Department underneath the cruiser of officer Richard Fouts. Thomas was pronounced dead at the scene. Fouts was accused of dragging Thomas 10 blocks from near the Ninth Street playground to the parking lot downtown.

Thomas was pronounced dead at the scene.

Fouts was not charged in connection with Thomas’ death.

George Floyd died on May 25 after white Minneapolis police officer put his knee on the handcuffed man’s neck for eight minutes and 46 seconds. A viral video of his death has led to protests against police brutality as well as marches across the country.

The officer who held his knee against Floyd’s neck, Derek Chauvin, was charged with murder and manslaughter.

Everyone is invited and encouraged to participate in the Ironton Unity March, but people are advised to remember we are still in the middle of the COVID-19 pandemic and are encouraged to social distance and wear protective face masks near other people. If you are sick, you are asked to stay home and participate online.

The Ironton Tribune will be livestreaming the Ironton Unity March on its Facebook page.